I'm still digging through my photo files. Most of these will be additional photos from my day job.

The first isn't a very good photo but I'm posting it anyway😇. We were going over the top, great circle route from the PNW to Iceland, when we got a great display of the Northern Lights. 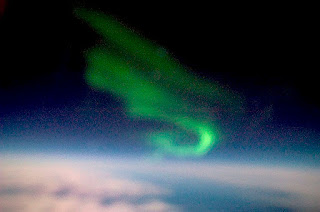 This is the "King's Tomb" in Kabul. You can't see it but off in the direction the man is looking is the stadium where the Taliban did most of their public executions.  Like every wall or structure in Kabul the tomb is pockmarked from ordnance of some kind. Kabul was at one time a beautiful city but years of war have had an effect. 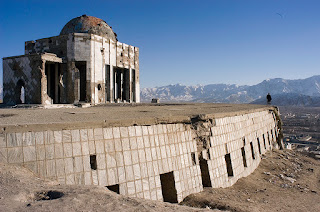 During the Sudan tour the Evergreen crew and the South African ATR crews would spend off time in one or the other crew quarters. Lyndsey, on the left side of the photo, was my "Engineer" in both Sudan and Afghanistan.  The young woman was a flight attendant for the ATR, she had the hungriest eyes of any woman I've every met and was a source of many soap opera problems in the ATR crew house. Lyndsey continues to be my maintenance person at Flight Safety. She was perfect for Flight Safety, very fast but not very good 😀 (which is not true but makes a good story). At this time she was pre-operative. We kept in touch for years after I left Everygreen but I lost contact after her transition. 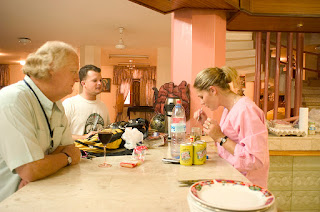 Refueling in Keflavik, Iceland on the way to The Sudan. This was my first flight for Evergreen. I was hired to fly for Evergreen's headquarters but as I was leaving Hobby Airport after flying home from my indoc training I received a call to get on the next available flight to Anchorage, AK. to fly the UN Learjet to The Sudan. Of course once in Anchorage we spent almost three weeks waiting for the Lear to be ready to go. Once ready My F.O. and I headed off across Canada to jump over to Iceland and then London before heading for North Africa. 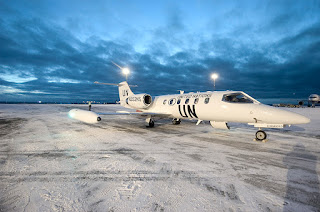 One of our first stops once in Khartoum was at a cell phone shop to get sim cards for our cell phones. This shop is typical of most Khartoum shops. What you can't see is the incredible number of different cultures in Khartoum and most of them were in or near the cell phone shop. 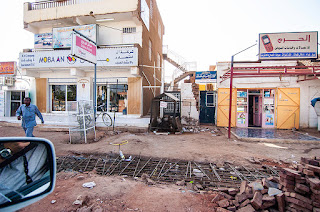 Khartoum traffic was also incredible with everything from camels and donkey carts sharing the streets with cars, trucks and buses of all conditions and ages along with old men spreading their rugs almost in the street for afternoon tea and then add in the herds of goats and sheep. Another factor was roads meant nothing, if it was open someone was driving on it. If you haven't seen it you can't believe the chaos.

That's it for today,