The desk is coming along. The slab is sized and needs clean up and beveling. I'll start on the drawer tomorrow or Wednesday. 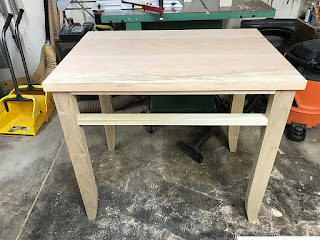 The joys of home ownership. I expect because of the amount of rain we have had the pool retaining wall fell this weekend. The original contractor is out of town, so no idea what the repair cost will be but I bet I don't want to know. Oh well, it's only money.

BTW, because of the problems of Unplugged Shop I'm building a reading list. I'm digging through my history to find blogs I like to read. It is a PITA to do it that way and I expect some will be missed. If you would like for me to read your blog please either reply with your URL or email me with the URL so I can add it to the list.

The last post I received on Unplugged Shop was posted 02/21. I've cleared my cache but still no joy. Any suggestions? BTW I assume Unplugged Shop is still working and posting new links for others just not for me. Well, maybe not. I just thought of trying Unplugged Shop on my iPad and same story the last link was from "Endangered Alphabets" on 02/21/19.

MsBubba's Desk In Glue Up

The desk is in glue up. At this point it is what it is. 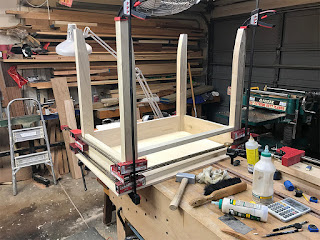 MsBubba wanted the base painted, the reason for Poplar, so once out of the clamps I'll turn the panting job over to her.

A couple of days to make and fit a drawer and trim the top and this sucker will be out of the shop. My work schedule next week is a late afternoon show with a finish at 2200. Those couple of days may not come until next week.

I used Old Brown Glue for the glue up, it needs a good 24 hours to set. I expect the rest of the day will be spent sharpening iron, having a whiskey or two, and a afternoon nap. Life in the desert is good.

The desk build is moving very slowly but at least it is moving. I'm doing the final fitting and prep for gluing up the base this AM. If MsBubba doesn't have other plans the base should be in clamps by afternoon. 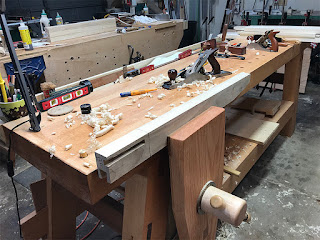 The bench build itch is strong this morning. As I've posted before, even though I've never given birth I think building benches is similar, six months to a year afterwards you forget the pain and only remember the joy. For some reason the joy is there this morning. It could be because of an online conversation I've had with a possible Moravian bench builder about his vise choice.

If portability is not important it opens up the types of vises that will work, everything from English QR to even Pattern Maker type vises as well as different end vises if you are an end vise person. With a little thought the core ability to break the bench down for moving or even shipping could be retained but I expect it would take more than one person to handle the slab with a couple of metal vises hanging on it.

Anyway it got me to thinking about what changes would be needed to use Benchcrafted vise hardware with its "crisscross" and the wagon vise hardware. Would either vise improve the bench as a shop bench? I have my doubts but there is only one way to find out.

Of course there are one or two major problems with that. Where would I put that sucker when finished. I could sell one of the current benches if the new bench worked out to be better but what if it didn't and frankly the Lake Erie wood screw leg vise on the current benches would be very hard to beat.

I expect this madness to pass but I hope the woodstore doesn't put either its Ash or Beech on sale any time soon.

A couple of chairs and some short stools up once the desk is out of the shop.

I'm moving south.  This Winter has been Winter. We have been in Tucson for just under thirteen years and this is the first snow at our house. Snow in the surrounding mountains is not unusual but in the valley, it doesn't happen. 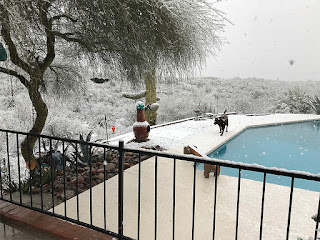 Of course Sweet Maggie Dog and MsBubba loved it and it seemed half of Tucson was driving over Gates Pass to look, photograph, and play in the snow.

The good news, by the time MsBubba and I had  done Gates Pass, finished lunch and picked up my cleaning it was gone. Maybe I'll stay in Tucson a little longer.

Why I Love Moravian Workbenches

As posted earlier we had the Challenger program's instructors and SO's over for BBQ on President's Day. The plan was to serve in the back garden. WX had other plans. Just before setting the food on the table (Portable Moravian workbench) a cold front blew through and we moved everything inside. I know laugh at us old desert rats the front brought the temps down from the high 50'sF all the way down to the 40'sF, BRRR, it was the wind :-).

The Portable Moravian was apart and stacked in a conner of the shop. I carried the parts except for the vise out to the back garden and after a quick setup I had a very stable serving table. Beats the hell out of a folding table and was just as quick and maybe easier to set up. Can you tell I love my Moravian workbenches. 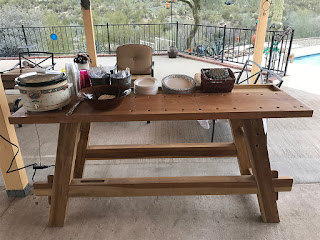 BTW, it could have been dinner at the nursing home, even with the Intern and her husband included the average age had to be over 70.

Here is a photo of the brisket finished and ready to serve. 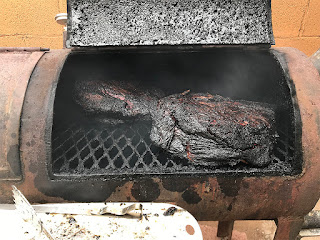 I was too busy to take photos after that one. You just have to take my word, the brisket had a beautiful smoke ring and was moist and tender. We finished off most of the two briskets. I'm not sure which was better, the brisket or the "There I waz" lies told.

Today is one of the rare days the Sim is shut down so all the instructors in my program are off. I figured it is a good time to have food and drinks together, it doesn't happen often.

I have two briskets, a half gal. of Luling sauce, close to a cord of Oak and Pecan, and I'm making a bed of Mesquite coals as I type. 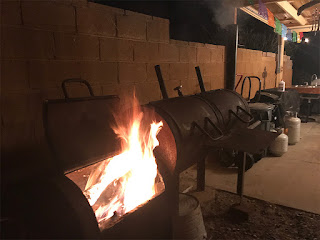 Once I have a coal bed I'll finish bringing the pit to temperature (210F-215F) with the Oak and throw the briskets on for about 8 hours.

There are two pounds of beans cooking, my co-cook is bring the potato salad, slaw, and sourdough bread (although not authentic, it should be "Wonder" bread or soda crackers and served on butcher paper and there isn't a "Big Red" to be found in Tucson). Beer and sodas will be in a tub of ice. The only downside is today will be cool (50's F) and it may rain this afternoon. The cool can be taken care of with a fire in the firepit and the back garden has a large roof.

Andy asked for some more photos of the tool rack. 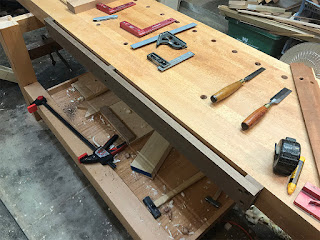 The tool tray is removed so you can see the rack. 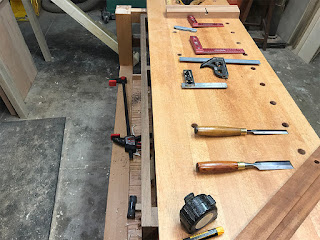 Looking down the rack from the left end of the bench. 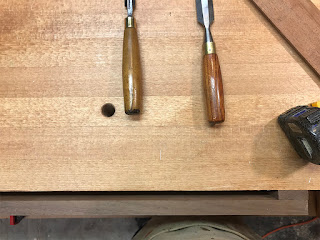 The shop Moravian bench has a quick and dirty tool tray that I keep telling myself I'm going to replace with a nicer one, someday. You know how someday never gets here if the butt ugly thing is working. Whatever someday I'll make a nicer tool tray.

What I have missed on the bench is a tool holder on the back side of the front slab. All my other benches have one because they have split slabs and no tool tray. While I've grown to like the tool tray I still miss having a tool holder for my squares, chisels, and saws that are in use.

I was looking for an excuse to not work on MsBubba's kitchen desk and what better is there than making and installing a tool holder for the bench.

From the back side: 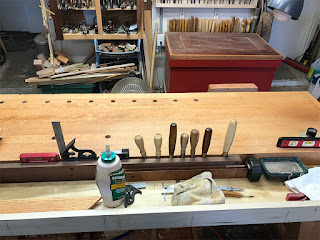 From the front side: 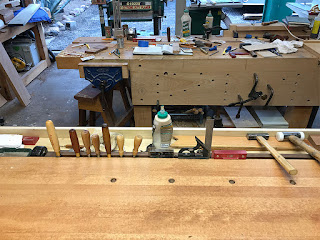 MsBubba's desk base has been dry fitted and is taking up room in the shop. I needed to figure out how much to take off the legs. After rough trimming of the legs they will need shaping and all surfaces planed before glue up. Get a drawer made and cut the top to size and I'll get that sucker out of the shop. 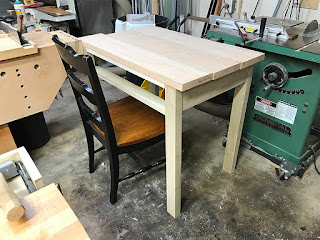 The earlier post about butt scratching over maximizing the strength of M/T joints in a thin leg led to this solution. I'm still not sure if it is the best but wood has been chopped and there ain't no going back.

I decided on using double tenons separated by a stub tenon as a way to minimize loss of wood in the leg. That decision meant a fairly complex markout. I've found the best way to attack that is to make a jig with the markout included.  The jig has an additional advantage of insuring at least one wall of the mortise is vertical.

It is easier to show the jig that to explain how it works: 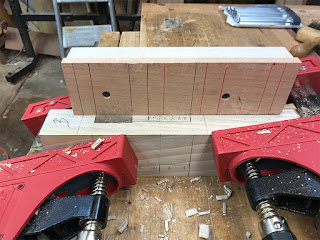 The last mortises I had chopped were on the just finished Moravian workbench. I will not say you lose the feeling for chopping with a layoff but at least I do. The first couple of mortises were slow and ugly. With a little paring they will clean up and be usable.

That slow and ugly begs a question, why? That answer, I think, is too much force. If it has been a while it is easy to forget "go slow to go fast" and you lose your "ear". By the third set of mortises the "ear" had returned and the muscle memory had as well. Then it was narrow cuts, tap, tap, tap, to the "sound" and the mortises went very quickly with one pass to depth and with clean walls.

As with most things in life, going Conan on it isn't the answer and is usually counter productive.

I took a day off from work and the shop yesterday. It was a fine Winter day in Southern Arizona with temps in the valley in the low 70's. A perfect day for a short hike in Madera Canyon. Madera Canyon is about halfway between Tucson and the US/Mexican border in the Santa Rita Mountains. The canyon is a major resting stop for migrating birds so we saw lots of cameras with huge lens and not many migrating birds although there were a few. BTW, I'd hate to carry one of those huge suckers up and down the trails just for a few really bad photos. Anyway a beautiful day for a walk in a beautiful setting.

MsBubba by a stream while still in the lower Juniper-Oak area: 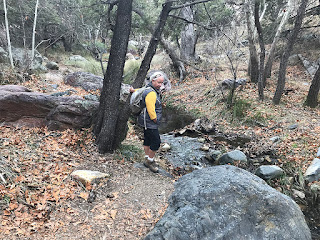