I'm doing most of my posting on Bubba 1. The Bubba 1 site is a general subject site with an emphasis on my Cannabis grows but also some woodworking, politics, and a daly journal. The reason for the change is I haven't been doing or writing about as much woodworking as was the case with OK Guy.

If you have any interest in the ins and outs of homegrown come on over to Bubba 1, I'm having fun being a gentleman farmer. When I started growing I had no clue how easy it could be to grow and at the same time how quickly you could fuck it up. If you want to get into the weeds of growing grass there is so much to know I could spend the rest of my life learning.

Here in Arizona I can legally grow 6 Cannabis plants per person per household. With a simple set up, just cheap LED lights, some grow bags, potting soil, and seeds from a good seed bank, no grow room or tent required, you can easily harvest 2 to 4 or more oz of bud per plant. With retail cost/oz around $300USD growing weed is one of the few hobbies that can save you money.  It is a hell of a lot cheaper than buying wood and tools these days.

Moving to Bubba One

While "OK Guy" will still be there, all new post will be on Bubba One . 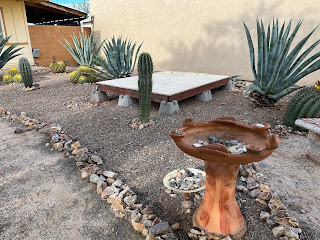 It is too much trouble to keep up with two blogs. Anyway that's the way the cookie crumbles and the crow ate the cabbage or whatever. See anyone that is interested on "Bubba One".

As you may have noticed there are few posts about working wood lately. Life is funny: While working full time I had plenty of time to build work benches and furniture, retire and it ain't so.

Spending a good part of the year in a motorhome, and what's left catching up on things undone while gone, leaves little time to build things. All that is to say the blog will change, not much woodworking, mostly about my and MsBubba's life in this upside down fucked up world but tempered with things that give hope and joy.

I hope some of you will hang around and enjoy the ride. See you on down the road.

The Motorhome's AC and fridge have been turned on and for the most part it is packed with all the gear for the Oregon trip. We are booked to camp host at two Oregon State Parks for June thru September. There is always a chance that will extend, one of the advantages of being retired, time is our own.

We have two more things to care for in Tucson, dinner with some friends tonight and MsBubba and I have Doc appointments on Monday. I expect we will be on the road Wed.

See you on down the road,

P.S. I'm really retired now, Yesterday FSI contacted me and I burned all bridges. Like Kris Kristofferson wrote "Freedom is when you have nothing else to lose". Feels good.

Abortion Not Just a Woman's Issue

This is a re-post from June 2019, I expect it is also one of the reasons my blog was removed from the "Unplugged Shop" web site. I'm re-posting because as the title states "Abortion Not Just a Woman's Issue" and legal, safe, abortion is in danger. Even more than it was in 2019.

I was working nights as a Medical Lab Technician and days at the airport twisting wrenches to pay for my flying. I was close to finishing up my CFI so I could take the first step toward becoming a professional pilot. My future wife (FW) was working nights that Summer as a nurse’s aide at the same hospital. I can’t say we met cute but it wasn’t long before we were an item. She was in the UT’s nursing school, I made a lot of trips to Austin that Fall before she transferred to UT Galveston. Neither one of us had a penny to spare but some way we found enough money to be together.

A little back story: Roe v Wade wasn’t decided until Jan 1973. For a couple of years in the late 1960’s I was a very unsuccessful Medical supply salesman but I did have one important client a “Doctor Brown” who had an office in downtown Houston on Milam St. While I never met Dr. Brown I supplied his office with the best medical equipment money could buy and got to know his office nurse well. As you can guess Dr. Brown took care of the rich and well connected Southeast Texans with an inconvenient pregnancy. I wasn’t rich or well connected but I did know his office nurse.

Shortly after transferring to Galveston, FW found out she was pregnant. We knew by then we were going to marry but not until FW had finished school and had her BS in nursing. I was working two jobs, day and night to pay the rent and finish my flight training. Neither of us could finish our school or training if we married and had a baby. The problem was abortion was illegal, I did know Dr. Brown’s nurse and after much “what do we do” I went to her. Yes FW could get a safe abortion but it would cost $600. Two kids without an extra penny to their name having to come up with $4000 in today’s dollars was devastating. Someway we did it, today I’m not sure how but we did.

If we hadn’t our lives would be ruined, two people that because of an illegal abortion were able to live productive lives. FW went on to a PhD in nursing and I was to have a mildly successful forty year career flying corporate aircraft ending up on a Gulfstream GIV flying almost everywhere in the world before retiring to instruct other corporate pilots.

I’m telling this story because it is imperative that we keep abortion legal, safe, and cheap. FW and I were lucky because by chance I knew a safe abortion provider before Roe v Wade. At that time not many at our social level were so lucky. My and FW’s story is just one of millions then and now and anyone trying to take us back to before Roe v Wade is a cruel and heartless panty sniffing prig of an SOB.

Vote as if your life and your kid's life depend on it, because it does.

While moving some of the wood pile to make room for the Moravian Bench I came across a couple of lower stretchers for a small Moravian. All they need to finish is chopping the mortise for the wedges. I'm not sure why the stretchers were in the wood pile instead of holding the base units of a Moravian bench apart. My best guess is they are European Beech, be a shame to use them to hold apart a couple of construction grade base units.

I had a reason to use the portable Moravian Bench in the back garden last week. I figured while I had it out it would be a good time to change its storage location in the shop. This also allowed easy measurement of floor space required and a photograph of the bench stored.

Moravian in its new spot: 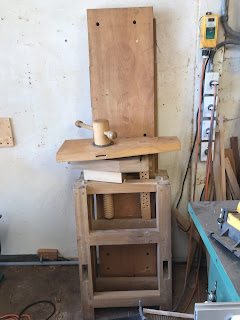 If I didn't work wood I wouldn't know I needed a portable Moravian bench, but I do work wood so I know how handy and easy to store, carry, set up and break down a Moravian bench is. Knowing what I know, even if I never build anything out of wood again but lived in a house or apartment I can not imagine living without my Moravian.

Almost as easy as a "WorkMate" but an order of magnitude better and more useful.

BTW, if I ever build another it will have a BenchCrafted metal screw with the 14" crisscross for the vise. The BC system takes less room and I think lighter than a wood screw with guide plus is just slicker than snot.

Not long till we leave for Summer on the Oregon coast.

See you on down the road,