I could be wrong but I believe most folks think of BBQ'ing as smoking the meat. Truth is smoke is a by product of the open flame but indirect heat used to BBQ meat.

Here are a couple of photos of BBQ pits to illustrate what I'm talking about: 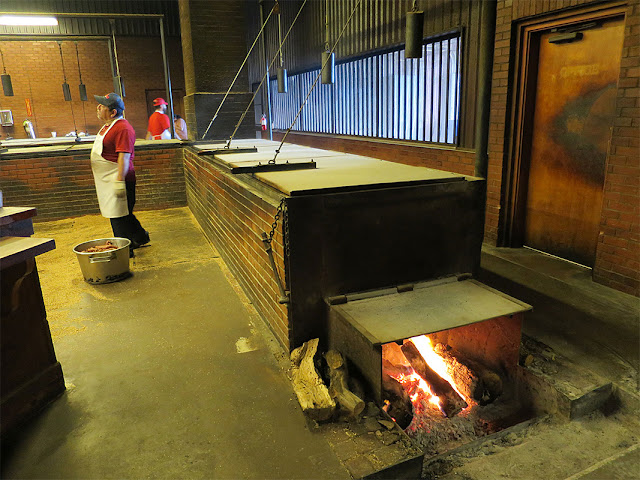 This is the best style for a working pit. Fire box at one end, chimney at the other and a metal top. Truth is there is no need for the lid on the firebox or even a box. I've seen pits at some of the best BBQ joints in Texas with no box at the fire end, just a opening with a pile of coals under it and a stick or two leaning over the coals with one end in the opening. Once you have your bed of coals it takes very little wood to keep the pit on temperature. BTW, the "draw" can be really strong.

The Salt Lick pit just outside Austin in Driftwood, Texas: 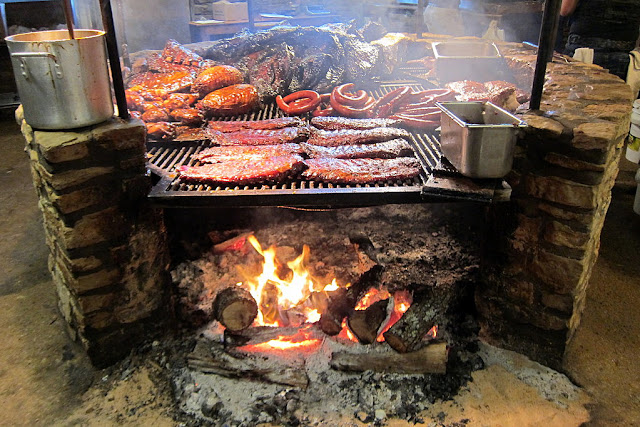 As you can see no traditional pit just open flame but indirect. Not my favorite pit but it works, the Salt Lick is one of the top rated BBQ joints in Texas.

With a Pipe pit with firebox like my current pit the BBQ'ing is done with the firebox lid open so the cooking area is heated with an open flame and not smoked. If you want to smoke it just takes closing the lid.

Some folks like "smoked BBQ", I much prefer a less "smokey" BBQ that comes from an open flame.

Any Texas Pit Master will tell you good BBQ needs no sauce, sauce is to cover up poorly cooked meat. Then at the same time they each have their own "secret" BBQ sauce. I'm guilty as charged, my excuse is the sauce is for the sausage. 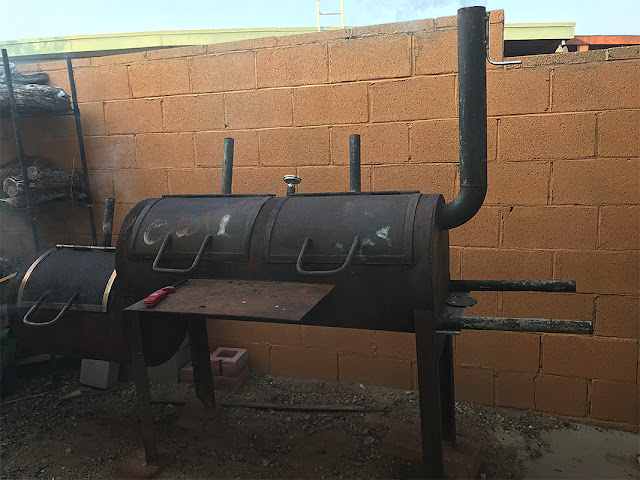 Getting the pit to temperature. Perfect is 215F, but should never go over 220F and no lower than 210F. This pit is pretty good and once you get everything balanced out it is almost walk away. It is not as good as my old rectangular brick pit lined with firebrick and a metal lid but for a round pit it is not bad. 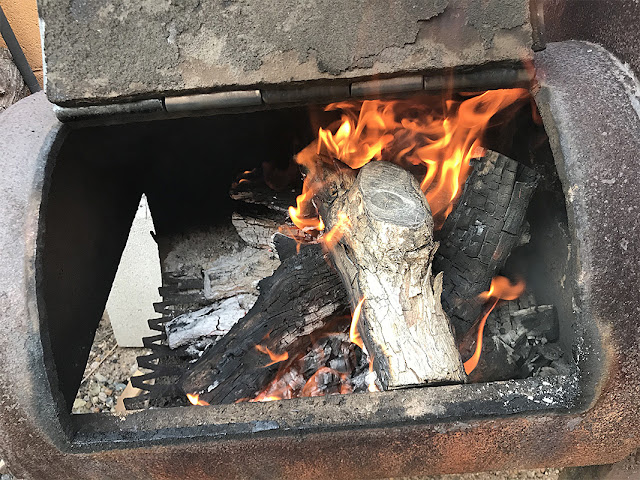 If everything is working, the pit isn't a smoker but gets indirect heat from the firebox. The pit is on temperature and has been for 20 or so minutes. For another hour or so I'll check temperature every 5 to 10 minutes. If it continues to hold, then it is just a matter of adding a hunk of wood when needed and occasionally checking temperature for the next 6 to 8 hours until the brisket reaches 180F or so. 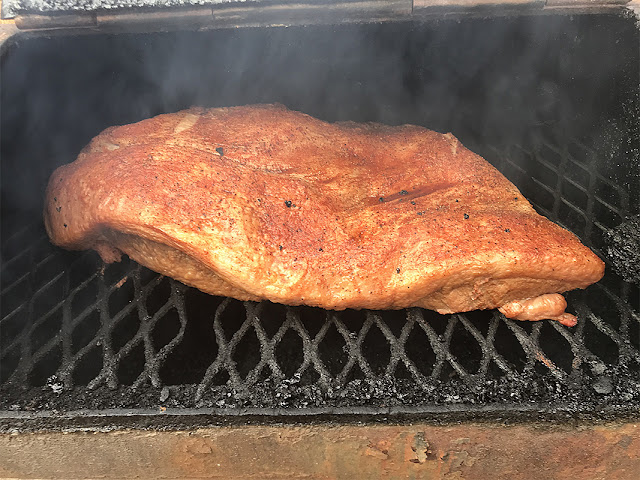 The brisket with a salt, pepper, garlic, and red pepper rub. When finished it will be served dry with a simple tomato/mustard sauce on the side for the folks that want sauce.

Just before taking it out of the pit, internal temp is 195F and ready to be pulled: 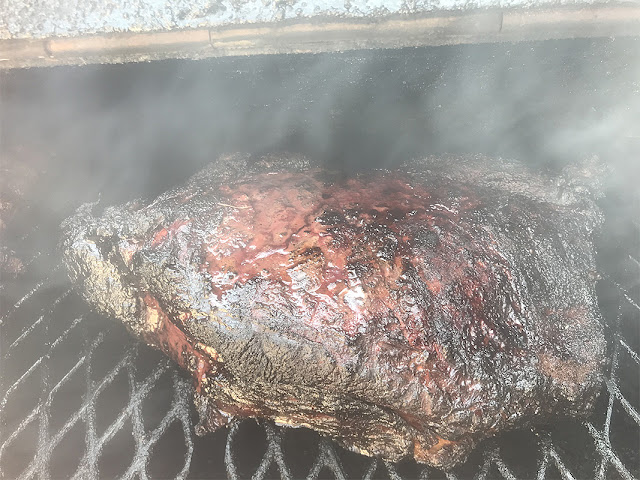 Finished and the first samples. 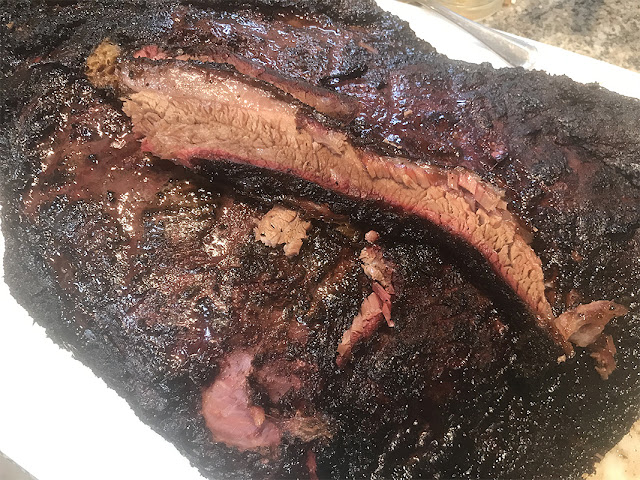 It is unbelievable good. melt in your mouth tender with wonderful flavor. I hope I do not make myself sick eating it tonight. It is so good I could eat the whole damn brisket in one go.

I did a rack of ribs as well. They are tasty, tender, and good but do not hold a candle to the brisket.

I'm still crippling around on a bad wheel so not much is happening in the shop even sharpening is too much some days. There have been a few days where whisky and a elevated foot was all I could do. On one of the good days I did install a stitched cotton wheel on the grinder and have taken a couple of my old Freud Chrome Vanadium chisels (BTW, they were the first "good" chisels I bought from the Garret Wade catalog many years ago) and ground a Unicorn profile then buffed on the buffing wheel with green stuff. 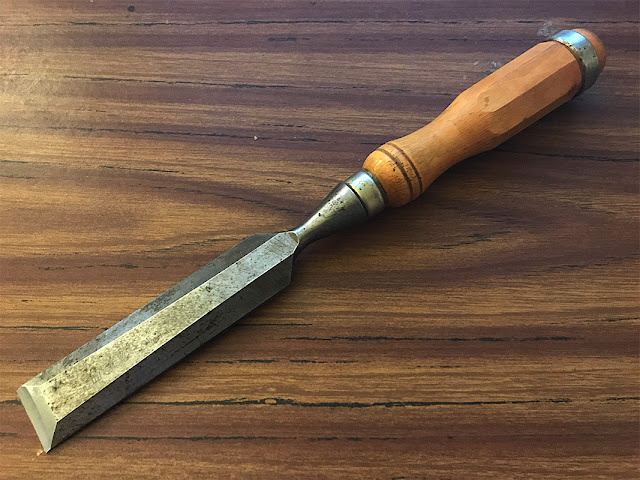 First go, David Weaver may be on to something. First it is very quick, grind a bevel on the grinder, hone a secondary with a Washita, Medium India or other quick 1000 grit or so stone. Use whatever you have handy, then maybe 15 to 30 seconds on the buffing wheel. The chisel comes out very sharp and the edge is long lasting, maybe longer lasting and sharper than off a polishing stone.

That's the good news, the process seems to work, it is very quick, and the equipment is inexpensive. That may also be the bad news. What do I do with the tens of thousands USDs I have in sharpening stones when to get a sharper, longer lasting edge all you need is a grinder with a buffing wheel, a little green stuff, and a $30 USD India stone. Also maybe a meal or two of crow.

Check out the Unicorn profile posts on Wood Central, wear your masks and stay safe,