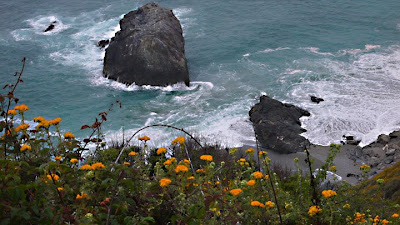 We made it to Paso Robles for the night, the next day Blythe, CA for a RON and then home to Tucson.

I'm not sure how many miles we did but I did the 4000 mile oil change just before leaving home and the odometer had 11,200 miles showing when we pulled into the driveway. 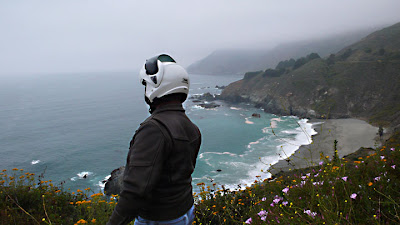 The next day we rode down US101to Leggett, CA where we joined CA1 to Gualala, CA. What a great motorcycle road from Leggett to where CA1 joins the coast, it's pretty good once on the coast as well

. The hotel in Gualala was the nicest we stayed in. I can't remember its name but it is on the south end of town and next to the Road House Cafe.

The next morning we continued south pass San Fransisco and Monterrey, once we were south of Monterrey the horse to the barn syndrome kicked in and we headed east for home.
Posted by I'm a OK guy at 7:00 PM No comments: 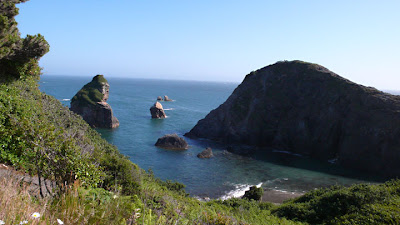 Our first day's ride south took us as far as the Oregon/California border. We RONed at the Harris Beach State Park outside of Brookings, OR. Harris Beach became a favorite of Ms.OK, beautiful setting and a very nice camping area.
Posted by I'm a OK guy at 6:58 PM No comments: 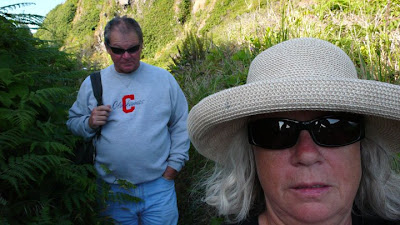 We had to visit "Short Beach" once more, by this time I was ready to throw a leg over the bike and ride 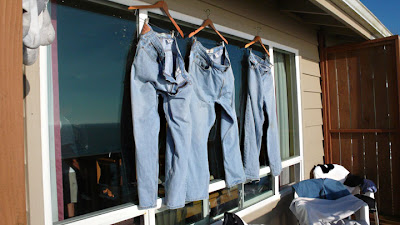 We had made it to the Oregon Coast and spent a week camping and visiting old haunts, it was time to start moving toward home but first we needed a night in a hotel to do laundry and recharge all the batteries. We stayed in the SurfRider just outside of Depoe Bay, OR. Nice place but the dryer quit working before the laundry was dry.
Posted by I'm a OK guy at 6:54 PM No comments: 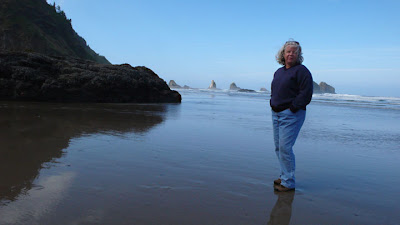 What can you say about the Oregon Coast other than it is magical, what a special place. When we lived in McMinnville, OR I believe Ms.OK walked almost every inch of the coast. I missed most of it because I was always gone on a trip to BFE, The Sudan or some other place half way around the world.
Posted by I'm a OK guy at 8:53 PM No comments:


The tides were the lowest of the year and people were out in droves to walk the beaches and to harvest shellfish.
Posted by I'm a OK guy at 8:51 PM No comments:

Made it to the Oregon Coast 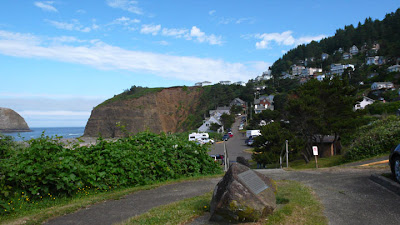 From Hood River we rode through Portland, OR then OR6 to the Coast. We set up base camp in Cape Lookout State Park. From there we took day trips up and down the coast and each evening returned to camp for dinner, a campfire, wine, beer, and martinis. I took one day off to have the OEM Dunlops replaced with Metzeler Marathon 880's. The Dunlops still had a lot of miles left but the Metzelers made all the difference in the world when riding in the rain. I wish I had done it earlier.

Photo of Oceanside, just north of Cape Lookout.
Posted by I'm a OK guy at 8:50 PM No comments: 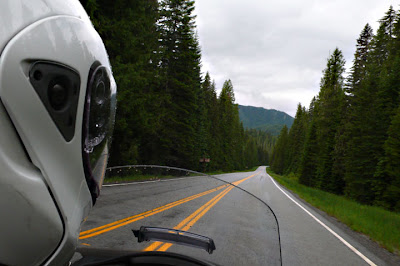 We left Butte on I-90 for Lolo and US12 to cross over Northern Idaho. Lolo pass was a highlight of the trip. The only negative, the OEM Dunlops do not handle rain well and a couple of times the bike got a little squirrelly going through Lolo pass. We made it to Hood River, OR where we shut it down for the night.
Posted by I'm a OK guy at 8:47 PM No comments: 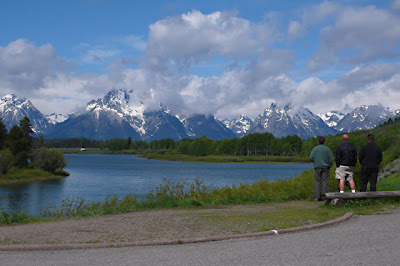 After Grand Junction we cut across Western Colorado on CO139 to Vernal, UT to spend the night. I've ridden or drove most of the roads in the western US but this was my first time on CO139. It was a pleasant surprise, I wouldn't say it was a great motorcycle road but it was much better than expected. The next morning the plan was to ride to Jackson, WY to spend the night and the next day do Yellowstone NP. We had a couple of ways to get to Jackson and I picked the eastern route over the western one because of WX. It turned out to have been a good chose. We watched rain to the west almost all the way into Jackson and only had to put our rain gear on about 50 miles south of Jackson.

Yellowstone was pretty much a bust, too damn many people, RV's, cars and road construction to enjoy the park. I almost lost the bike and trailer going over several of the road work areas. The mud was really slick. We exited out West Yellowstone and rode to Butte, MT for the night. The ride up US287 to connect with I-90 was one of the prettiest of the trip. After the crowds of Yellowstone it was most enjoyable. BTW, this part of the the trip, from Jackson, WY to Lewiston, ID was mostly in the rain. All I can say is thank you Frogg Toggs and Shoei, they kept us dry and comfortable.
Posted by I'm a OK guy at 8:45 PM No comments:

On the Road to Silverton 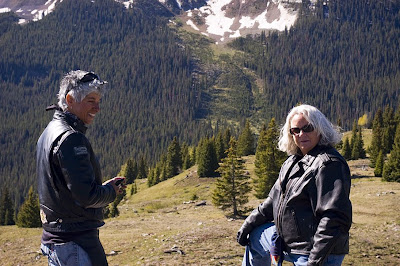 After Red River we rode to Durango, CO to position ourselves to do the Durango-Silverton-Ouray (US550) ride the next morning.

One of the advantages of traveling on a bike is people will stop and talk to you, other bikers as well folks in cars, trucks, and RV's. We met a woman just out side of Durango who had been riding solo for 6 weeks. She was from the Seattle area and had lost her job. She decided what better time to see the USA on her Harley Soft Tail. We rode together for a good part of US550. She is on the left and Ms.OKGuy is on the right.
Posted by I'm a OK guy at 12:43 PM No comments: 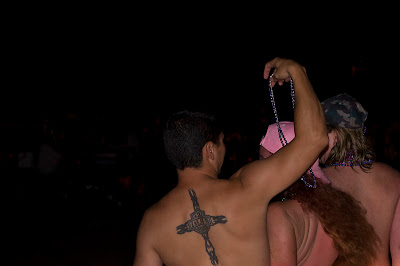 I have not a clue what they were doing 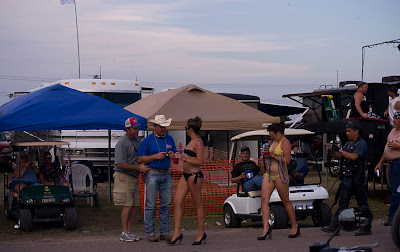 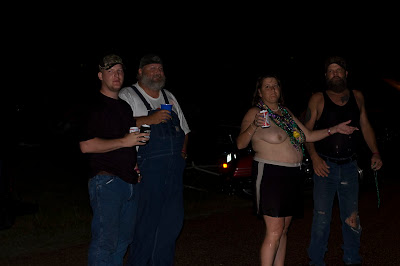 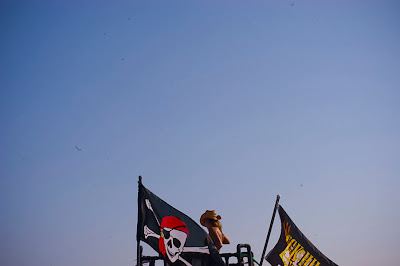 ROT as usual was a blast. There is not much to be said other than it is totally tasteless and tacky....but what the hell, tasteless and tacky is usually fun. I didn't spend a lot of time on the parade route this year so I really can't say if there were more overt sexual activity this time or not. For the record I only saw one guy getting a blowjob and one gal the first night being eaten out on stage. Anyway I will attach a few of this year's photos without much commentary.
Posted by I'm a OK guy at 12:30 PM No comments: 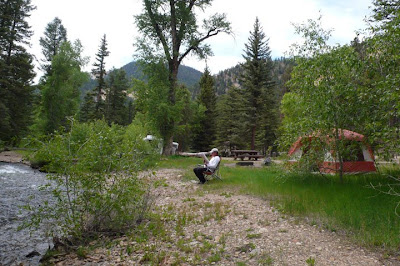 After ROT we spent another day in Austin visiting with our girl child and her SO and short visit to Hippie Hollow. We left Austin early Tuesday AM and rode to Amarillo, TX before we shut it down for the night. The next morning we did the short ride on to Red River, NM and camped by the river.

Red River is still beautiful and not too overrun with people. It had been over 30 years since my last time there and there were a few changes

but even with the new development it was one of the best places we stayed on the trip.
Posted by I'm a OK guy at 12:27 PM No comments: 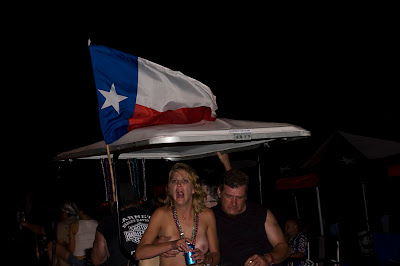 I left Tucson June 11th for Austin, TX so as to meet friends at ROT. Ms.Bubba was in Scotland visiting family and would meet me in Austin for the final day of ROT, after that we planned to ride to Oregon, with many stops on the way, to spend a week camping on the Oregon coast. we needed to be back in Tucson no latter than July 4th.

That's the back story, as always, when I get on or in a traveling machine I tend to do lots of miles with few stops for pictures or much of anything else. Ms.Bubba is more of a smell the roses kind of person so most of the photos are hers

The first image is of ROT, let me tell you it was great tacky and tasteless fun
Posted by I'm a OK guy at 8:21 AM No comments: