The title says it all. As the week progressed the shoulder hurt less and less and by Wednesday I had near full range of motion. My Mama didn't raise a fool (well except concerning money, tools, and women), I canceled the surgery and will start PT after Labor Day.

Starting soon will be a weeding out of extra tools. The photo below is of some of my #3 size planes and it is one of the smaller groupings. I expect I will keep the LN #3 (not shown), the PhillyPlane, and the Stanley type 9 and sell the rest. 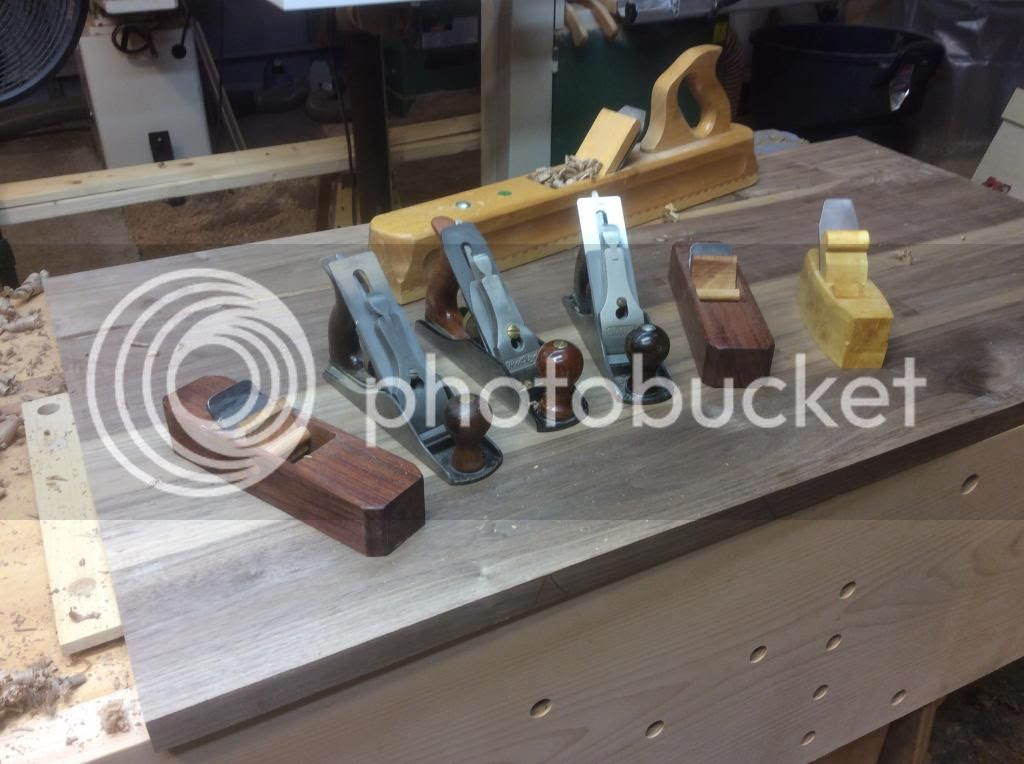 The #4 sized are a larger group. Of those I expect to keep two LN's, two Stanley's one a type 9, and the LV. 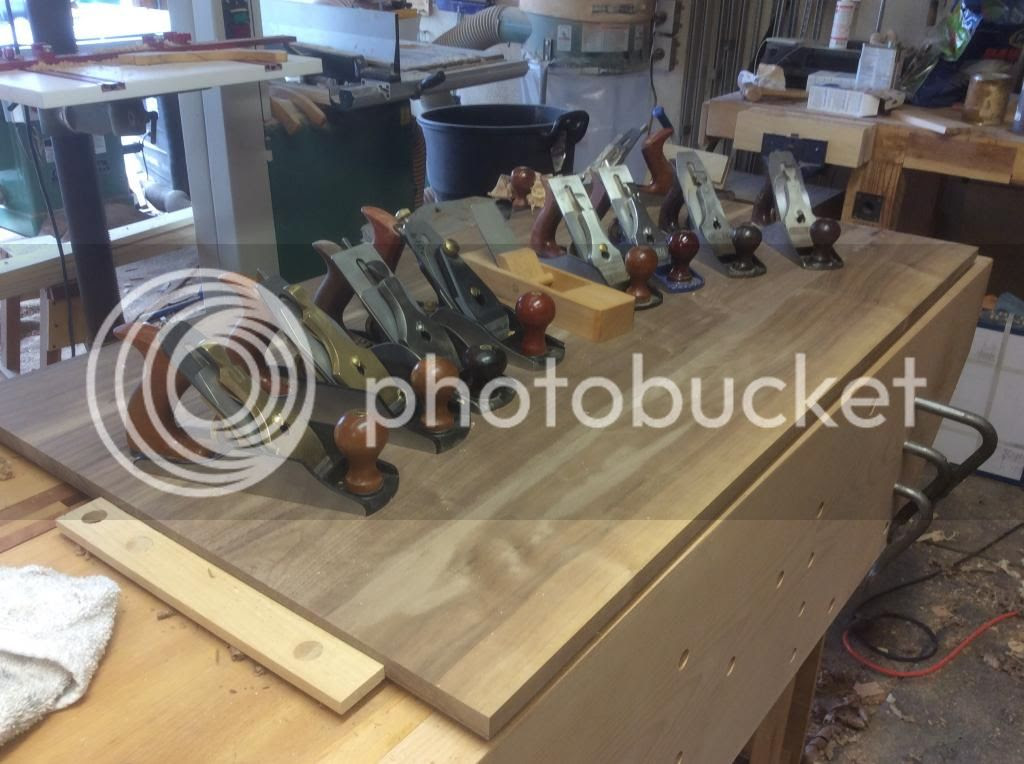 The #5 group is smaller than the #4's but still too many but I can make some excuses for keeping several. Of this group I expect the Stanley type 9 and maybe one other Stanley along with the LN will make the cut. 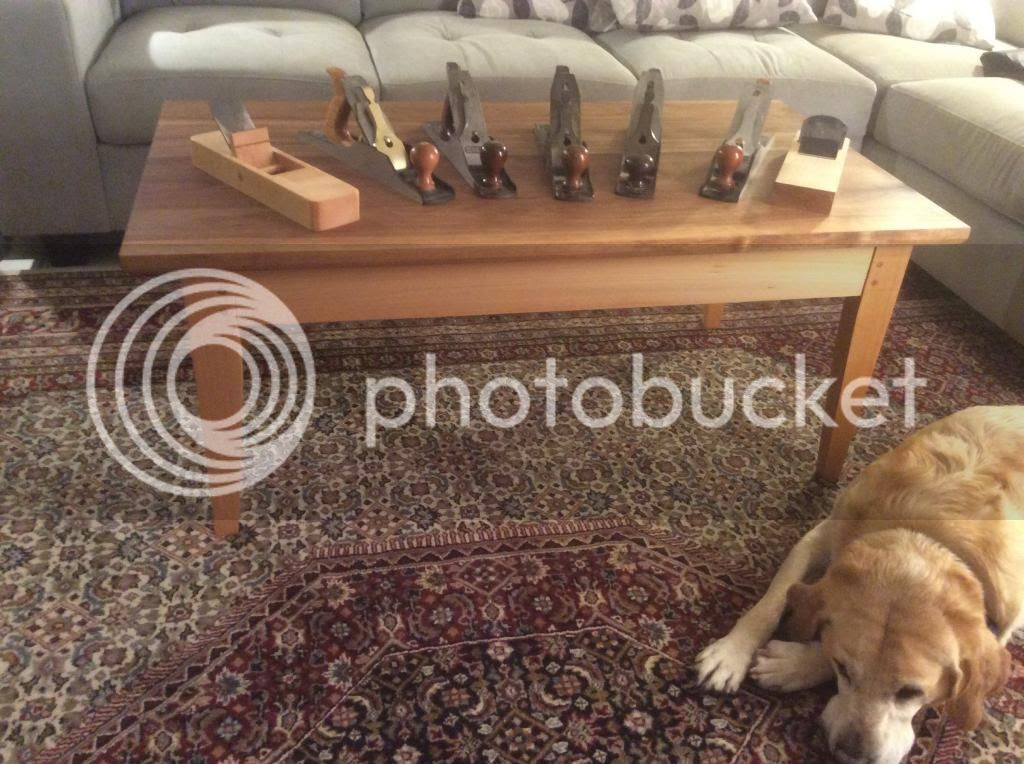 Bottom line, it a week or so I will post a "buy it now" listing a couple of days before listing on eBay. My guess is I will start with the #3's and work up to the #8's over several weeks. All the planes are good users, most with Hock or LV O-1 irons and chip breakers. With one or two exceptions all the Stanley's are type 13 or earlier.

First, I've a brisket in the pit. I've had to work at temp control today but I has kept me out of trouble so what the hey. Normally once the pit reaches temp you can almost walk away, just add a log every once in awhile and around 8 hours later it's BBQ. Today wind and ambient temp has been all over the place so my pit has as well.

Thursday I go in to have my right shoulder repaired. My guess is I hurt it skiing forty odd years ago, wouldn't want to rush into things don'tchknow. Anyway woodworking will be put on hold for a few weeks.

I figure the time can be spent putting spare tools on eBay. I'll post on here a couple of days before they are posted on eBay in case anyone wants one of 'em. Most will be motorcycle related but there are a good number of woodworking tools as well.

One thing that will be sold is the Dirty Fat Girl. We had a lot of fun together, been coast to coast on her in less than 50 hours, 1500 miles in less than 24 hours, Sturgis for the 69th bike week, Jackson Hole for a Billy's hamburger and more trips to Texas and Oregon than I can count. She has been a great bike but her time has passed.

See you guys on down the road.

Changes to the Grinding Station

This time of the year can limit shop time. Working the morning shift, usually a 0530 show and home by 1400 can really put a kink in your productivity. With Monsoon still in full swing the swamp cooler makes afternoons in the shop less comfortable than without. It is a small price to pay for conditions the rest of the year but little gets done when the day job runs through the best of the the shop time.

Damn Bubba cut to the chase.....As I've posted before I've round heels when it comes to ways of sharpening. Basically I've decided there is no one correct way to do the job just some ways work better with one type of tool and iron than than others. Lately I've been trying CBN grinding wheels on the tools I grind. They, CBN wheels, grind supper fast and stay cool but I'm not sure if it isn't too much of a good thing.  Bottom line while driving the Princess around the PNW I thought of some changes to make to the grinding station. Once home and back to work, projects this small are about all that can be done for another month or so.

All that is a long way around to posting a photo of the changes I made to the shop's grinding station a couple of days ago. I removed the Tormek rest, mounted both the 80 and the 120 CBN wheels and installed a couple of adjustable tool rests. Does it work any better? Maybe....I'm not 100% convinced the CBN wheels are better and may replace the 80 grit wheel with a Norton. 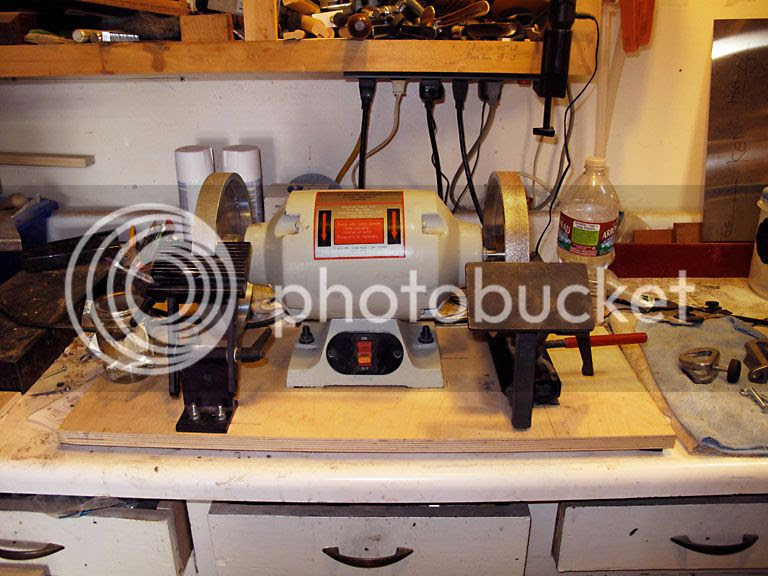 Made it back to Tucson yesterday afternoon. Three weeks on the CA-OR coast, missed my shop. The best part of any trip is the trip, the stuff that happens between is OK and necessary to having the trip. Or at least that is what SWMBO tells me. I don't do adult supervision very well either, it's good to be back in the shop.

As always the PNW coast is beautiful, the WX perfect with temps in the low 60's to high 70's. The critters had a blast swimming in the rivers and ocean while fetching balls. For the drive home I made a couple of bad decisions and broke two rules of driving in CA. First rule: don't drive through LA if there is another route. Second: the same applies to San Fransisco.  My normal route to get to the PNW is get on CA 58 to Bakersfield then either I-5 or US 99 north and cut to the coast after Sacramento. That was the route going up, cutting to the coast on CA 20, BTW a good drive. CA 20 is slow going because of the curves but still enjoyable. We made the trip to Ft. Bragg in about 21 hours total road time. Not too bad pulling a 5th wheel (55 mph in CA) and traveling with two big dogs and the boss. Coming home was not quite as fast. CA 20 was shut because of a fire which caused some problems getting to I-5. All routes to I-5 and Sacramento required a good bit of back tracking. Because of timing I thought breaking the rules of travel in CA could be done with minimum consequences. Wrong Bubba, they both bit me on the ass big time. Over four hours to get through SFO and over six hours to get through LA. We spent over an hour setting dead still on I-5 in LA because of a fuel spill, once moving they dumped us off onto a surface road with no directions to get back on any freeway. GPS can be a life saver, Guy Clark's "LA Freeway" was playing in my head, without I might still be in LA. After many turns  and miles on surface roads we ended up on I-210 to join I-10 east of LA. Bottom line we spent over 18 hours to get out of LA and another eight to finish the trip.