I worked on the new bench for several months until I found the perfect slab of Beech for a apron. Here is a photo of the newly added apron turning my bench into what I like to call "my cross Chanel" bench or English/French bench. It works so well when I turned the older bench into a planning bench I added an apron to it as well. 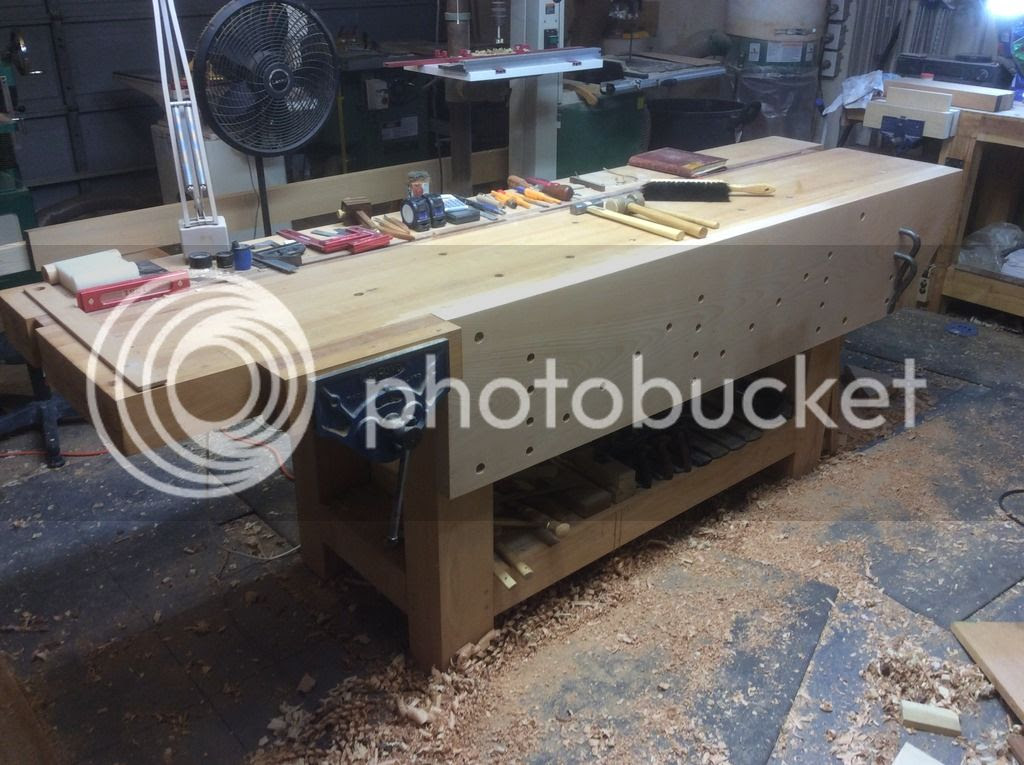 The shop stayed reasonably stable after building the current work bench until I decided to turn the second bench into a planning bench and moved it off the wall to a central location. Here is a photo of the current arrangement. 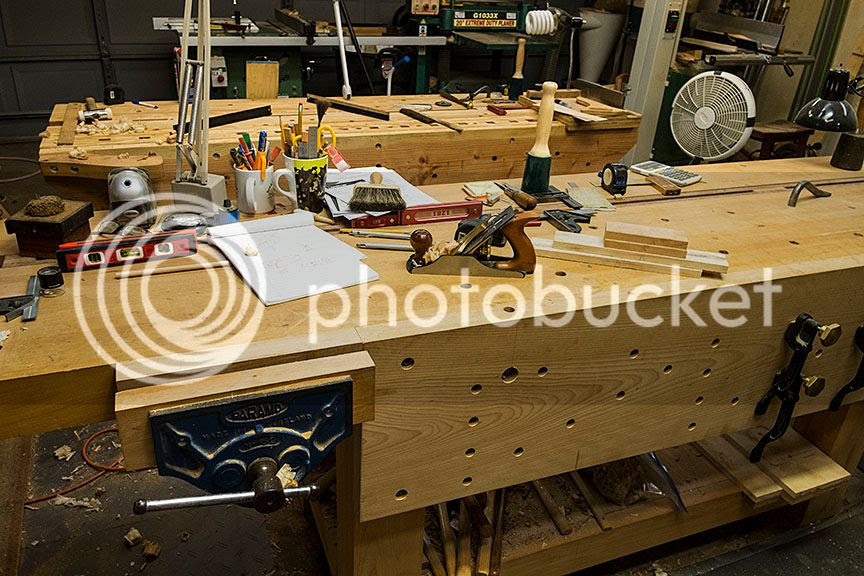 Looking South with current bench in foreground and planning bench in background. South of the planning bench arranged close to the door are the machines with the exception of the jointer to the right of the bench and a small lathe in the "tool room" aka Fibber McGee's closet.

BTW, a sure sign you are too old to live is when folks no longer understand your cultural references. The other day one of the crews I was working with did a near perfect 45 degree bank steep turn, never losing or gaining a foot of altitude. In the old days before "glass" as a sign of respect and acknowledgement of the pilot's skill you would ask the co-pilot to tap the altimeter to see if it was stuck or broken.  I let it slip out and both pilots looked at me like I had two heads, as if to say "what is this old coot talking about, why would we do that".

Damn that was a tasty rabbit....back to the shop. The jointer is to my right and the sharpening bench is to the left, just off the working end of the primary bench. behind the primary bench is the tool chest and on the wall the open tool cabinet, saw and plane tills, and chisel racks. 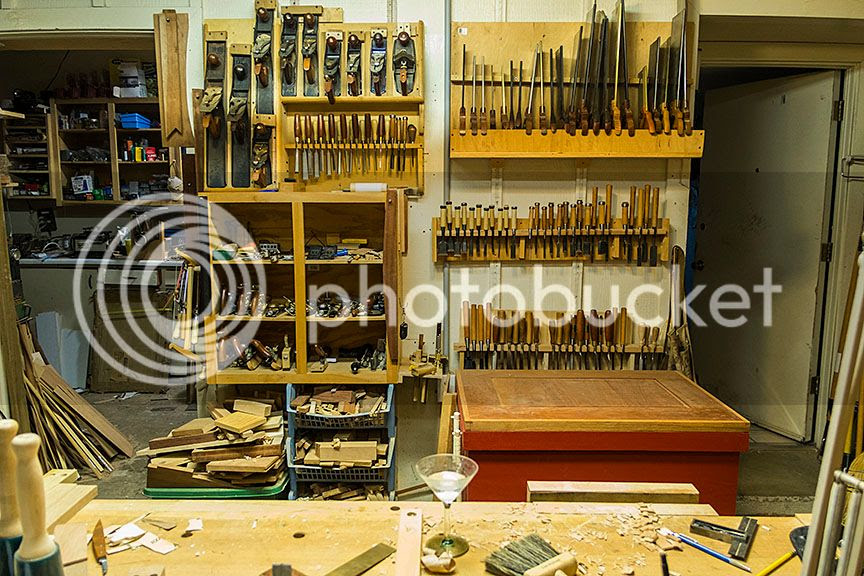 Notice the martini centered on the bench, work was over for the day. You can see through the door part of the tool room.

Next job is to cull the herd, of course I've been saying that for several years and it ain't happening. Anytime one tool leaves it is replaced by three.

James  over at The Apartment Woodworker started me thinking....I know dangerous when the few remaining brain cells start churning but it is what it is....about how my shop has changed over the years since settling in Tucson. For too many years everything was storied in a friends barn just south of DFW. Once we settled in Tucson and bought a house, I moved what was left of the earlier shop and added the power tools that did not survive the storage years.

Anyway here is an early photo while I was still using my old small work bench: 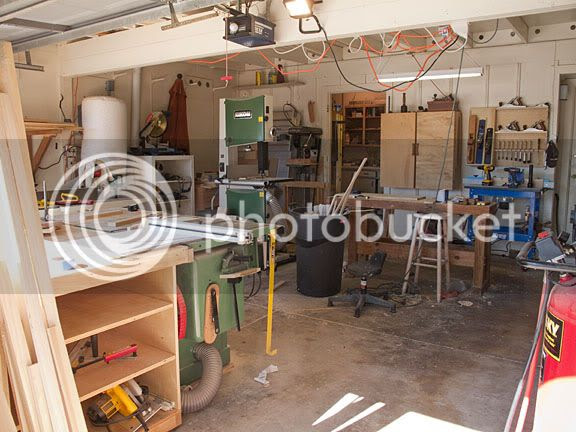 Even then it was 10 lbs in a 5 lbs bag. Stuff expands to fill available space.

Next up was building a larger work bench to replace the one that had lived in storage for all those years. BTW, the old bench became my sharpening bench. 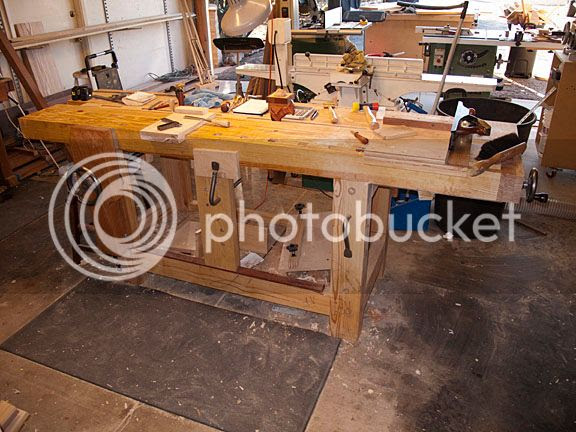 This was at the height of the Roubo craze and I fell for the hype. It made a good bench but over the years most of the Roubo things disappeared and I added an apron and lowered it to make a very good and solid planning bench.

The tool cabinet, saw till, and chisel storage has changed a little over the years but all the original ones are still in use. 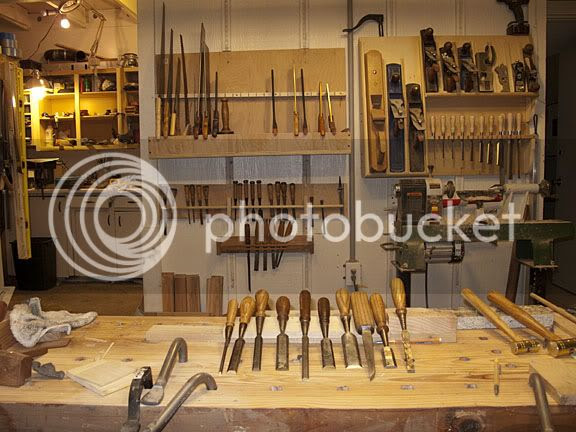 The first appearance of the tool cabinet with Ugly Dude sawing in the foreground: 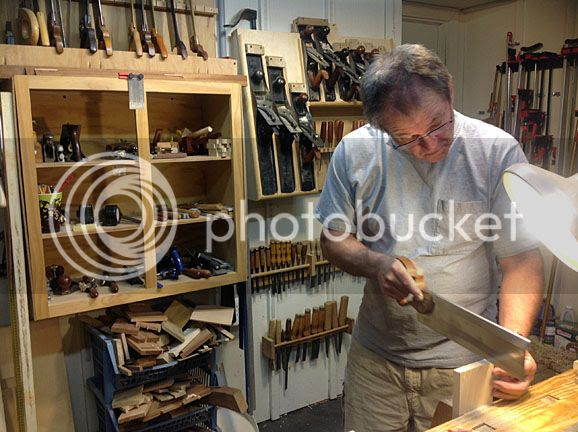 First appearance of the old work bench as a sharpening bench: 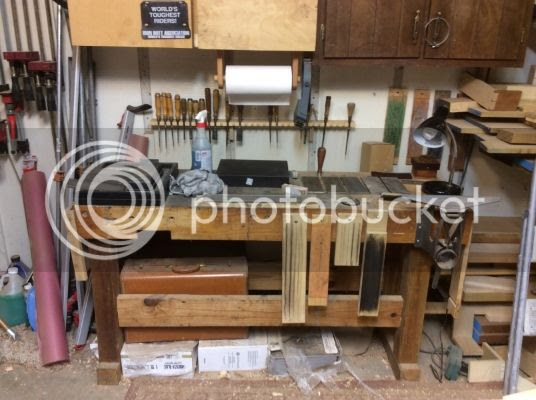 Starting to build the current bench, legs in glue up on the old/current planning bench and part of the slab on saw benches in the foreground: The Knew Concepts' saws are interesting and maybe a slight improvement over traditional fret and coping saws. Being able to turn the blade in the fret saw without using a pair of "dikes" to twist it is a great improvement but in use I find there is little difference between the two. Both use the same blades, both are slow cutting with a short throw. Breaking blades in either isn't a problem with good technique. Of the two, Knew Concepts fret or traditional fret saws, I will pick up the traditional about as often as the Knew Concepts, usually the one first on the turning saw rack is the one that gets the love.

I do not have a Knew Concepts coping saw so I can't address if it is an improvement over a Olsen coping saw but with a few mods to the Olsen I can get all the tension needed and the blade will not turn unless I make it. With a coping saw the blades are too thick to fit in my dovetail saw kerf, it limits the saws use for removing waste from dovetails and as with the fret saw the throw is too short for efficient sawing. Whatever, the cost difference between the saws (Olsen $13 USD, Knew Concepts $149 USD) would make it difficult to justify the Knew Concepts for so little potential gain.

The jewel of my turning saws is the TFWW 12" Bow Saw. Its blade is almost as thin as a fret saw blade, it has a 12" throw vs. a 5" throw with either a coping or fret saw. The bow saw makes very quick work of sawing dovetail waste, much faster than either a fret or coping saw. Because of its narrow blade it is almost as easy to turn as a fret saw and much easier than a coping saw. At $169 USD vs. $95 USD for the Knew Concepts coping saw or $149 USD for the Aluminum fret saw the 12" bow saw is a better saw for little more money and is a bargain compared to the Titanium ones.

As always with anything wood....YMMV.

Much thanks to   Ralph over at The Accidental Woodworker for a very nice surprise package in today's delivery. I'm still speechless, once I recover I will post photos. Thanks Ralph, you shouldn't have but I thank you. BTW, the box is beautiful.

I've some PTO to burn before August, I figure at least one long weekend a month is the best use. This last weekend I used four of 'em. We had planned to go to Mexico, as we were loading the critters MsBubba said "let's go to Houston instead, you have been talking about seeing the Grandpeanut". Worked for me.

It was a good trip, I've always maintained with a large enough fuel tank I could solve the Grand Unification Problem. The motorhome only holds ninety gallons of diesel so the GUP will have to wait but some others were thought through, mostly what I'm going to do once I grow up.

BTW, a motorhome is the only way to travel, only one needed fuel stop from Tucson to Houston but many quick "rest stops" and not once in a public head. Food delivered when needed, coffee on demand, and once night fell pop into a parking area for a couple of drinks, a good dinner, and a night's rest in your own bed. It doesn't get better. 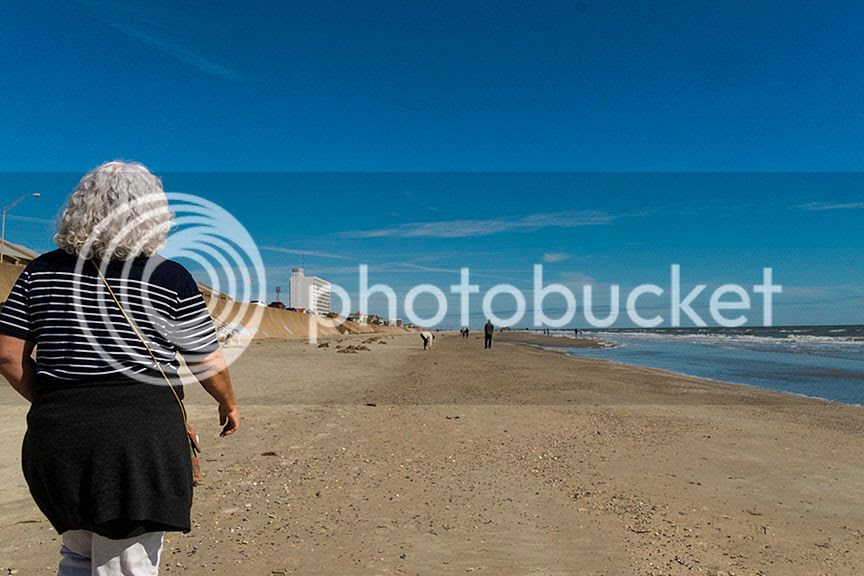 I'm working with some White Pine building a couple of large boxes, one I expect will end up being a traveling tool box. The other I haven't a clue because I think it will end up a silly little mm too short for its intended use. The older I get the more brain farts I have. This time I didn't allow for the thickness of the pin board. About as dumb as it gets and of course I've never done that before...anyone want to buy a bridge?

I haven't worked a softwood in ages, I must say it is interesting with the difference in feel and ease of working. Maybe some photos later.

Video five of The English Woodworker's sharpening series is up. Even if you think you know everything there is to know about sharpening iron I'll bet you could pick up some new tidbit from Richard's presentation....He is that good.