Back in my old stomping grounds. There are still two days before we need to be in Cape Lookout State Park so last night was spent parked in the Evergreen Air and Space Museum's parking lot. The Museum's parking lot is a great place to almost boon dock. Last night we had Grilled Salmon, rice and a nice salad on the tarmac next to the RV.

Evergreen was a love/hate job, I loved the work, hated the company. The flying was the most interesting of any job I had but the company was the worse managed of any company I worked for or even knew of. I flew both the GIV and several different LearJets for the company headquarters. You never knew where or even which part of the world you would be in next, many times the destination decisions were made at the last minute before takeoff or even while airborne. Dale Smith (RIP) was one of the last of the old school aviation pioneers. Dale was a brilliant innovator but a total asshole to work for, the old saying at Evergreen was "you were fired the day you were hired, You just didn't know the date yet".

If you have any interest in aviation you owe yourself a visit to the Evergreen Air and Space Museum if for no other reason than the 747 water park slide and a chance to climb over the Spruce Goose.

While the trip up is long and slow, this time we came a different way. Up through the Nevada desert instead of either Hwy 99 or I-5 thru California's central valley and nearly 700 miles of some of the worst roads in the States. We did 500 miles the first day and spent the night in a rest area north of Vegas. The second night was after another 400 miles of mostly desert in a Susanville, CA Walmart parking lot. As bad as that sounds, it was one of the better places to spend a night.

After The Susanville Walmart we made it to southern Oregon and spent a couple of nights in a commercial RV park next to Fish Lake, mostly so we could "dump" the black water tanks and use shore power.

Tomorrow starts a two month assignment as Camp Hosts in Cape Lookout, Should be interesting.

On The Road Soon

There will be little or no woodworking content for the next five months. We leave for Oregon on the 24th or 25th and if things go as planned will not return to Tucson until the second week of November. Because of the length of the trip I have limited room to haul tools and workbenches so that part of the packing is still to be decided.

Over the five months in Oregon we will stay in four Oregon State Parks and Campgrounds. Two of the Parks are inland on either a river or a lake and two are on the coast.

It should be interesting, I hope MsBubba and I do not kill the other after five months of living in a motorhome. It could be touch and go.

I was up and having morning coffee in time to catch some of the Saguaro blooms. 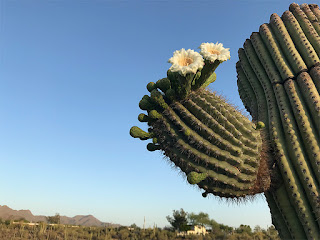 Our Summer road trip is fast approaching, We will leave Tucson maybe as early as the last of May and will be on the road until the first of November, if plans do not change. My dilemma is do I take a bench, shave horse, or both. Then next depending on bench, shave horse or both and how much room is in the tool box or boxes and which tools can I not live without. Anyway there will be a lot of "yes but" going on over the next couple of weeks. Of course one answer could be to say "the hell with it" and buy a guitar so I can become a Rock Star.

Saguaro cactus only grow in the Sonoran Desert. Our house is on the edge of the Saguaro National Park, West, so there are lots of Saguaros cactus in our neighborhood. We only have one on our lot but in any direction you look out over the gully, it is covered with Saguaro's. This is the time of year when the desert cactus bloom and set fruit. It is also feast time for all the critters as well as the indigenous folks that lived in the desert. Early American Use of Saguaro cactus

Anyway, a lot of BS just so I can show a photo of our Saguaro cactus blooms on one of the arms, each arm will have a like ring: 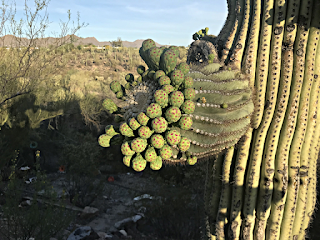 The buds open at night to the early part of the day revealing the white flower with a yellow pollen ring on the inside. Once the flower opens it is feat time for the birds and bees. I forget to add the Bats which share the range of the Saguaro.

The SIL wants me to make four box like things for him and he gave me the wood to use. There is no problem with making the box like objects but the wood is some of the softest Ceder I've ever tried to use.  You look at it hard and it tears out. I keep telling myself it is not furniture, just four small box like "things".