Most of the time when I rearrange the shop, hoping to gain working room it does not work. It is an amazing concept: A 5 lb. bag with 10 lb. of stuff is still a 5 lb. bag no matter how you arrange the stuff.

This time may be a little different, all the machines are in a tight group, each has room to work but they are tight. The big change was getting the dust collector closer to the machines and I re-hung a couple of wall cabinets which has opened up a good area for additional tool storage and even a little extra floor space around the bench and band saw.

It is still a work in progress with photos to follow but it may be a few days. I just have one day a week off as far into the future as the schedule goes and my day off this week was spent taking care of a couple of projects for MsOK's studio.

BTW, I have close to a $1000 USD of very lightly used 1/2" router bits I'm going to sell. Most of the bits are Freud with a few Whiteside. I used 'em for the kitchen build a couple of years ago and haven't a need for routers or bits now. I'd like to sell all at once. Photos and prices once I get a couple of minutes to work on it.
Posted by I'm a OK guy at 7:43 PM No comments:

I've been working the back side of the clock, most of the time I will just putter around he shop when on a nights schedule. I did a little cleaning and rearranging, moved the dust collector out of the corner and closer to the machines, and moved close to 1000 board feet of wood from one spot to another, my back may never forgive.

This AM I decided to work a little on the cabinet doors, while fitting the tenon in the third mortise the rail split from almost no pressure. Go figure,...proves my normal procedure of not working when on nights.

I've had some time free the last couple of days to spend on the small Sapele cabinet. I've rough dimensioned the Sapele rails and stiles and finished making the Sycamore shiplapped back. I've a nice spalted Sycamore board that should be enough for the door panels. I still haven't worked out the shelves, either wood, arrangement or if there will be drawers. I never have been very good at following plans or normal work order.

The LV Skew Rabbit plane makes short work of cutting the rebates and the LV Beading Tool does a nice job cutting beads. 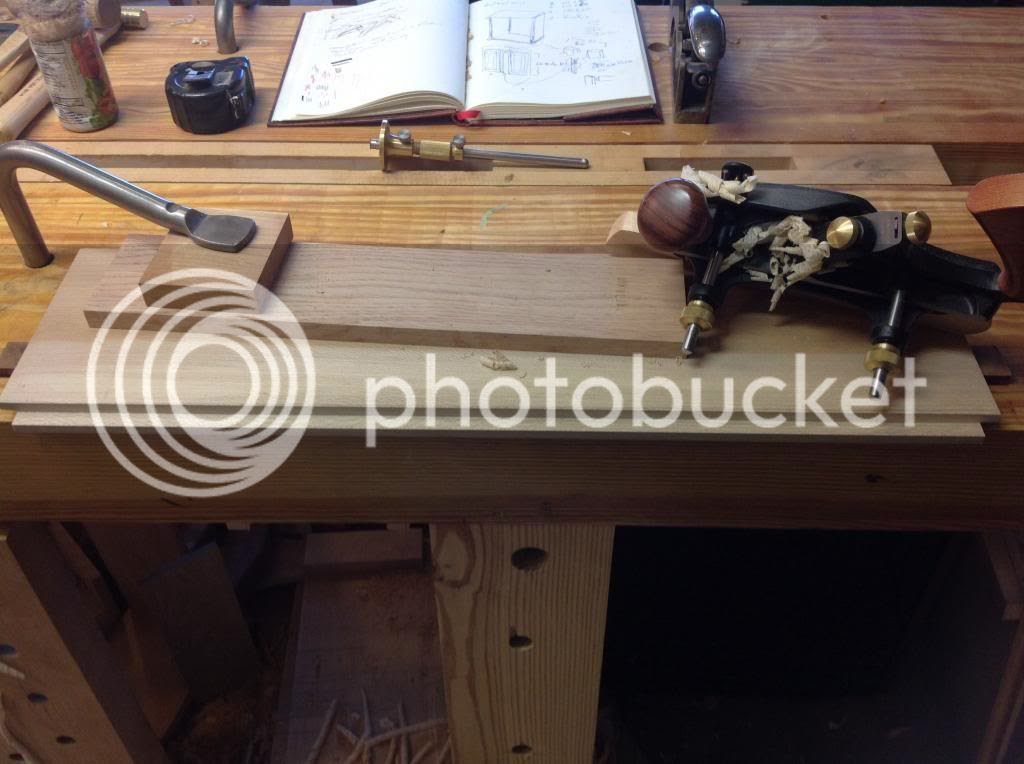 One of the beads on the shiplapped back, I've always used "scratch stocks" to bead, this was the first time using the LV Beading Tool. It's nice: 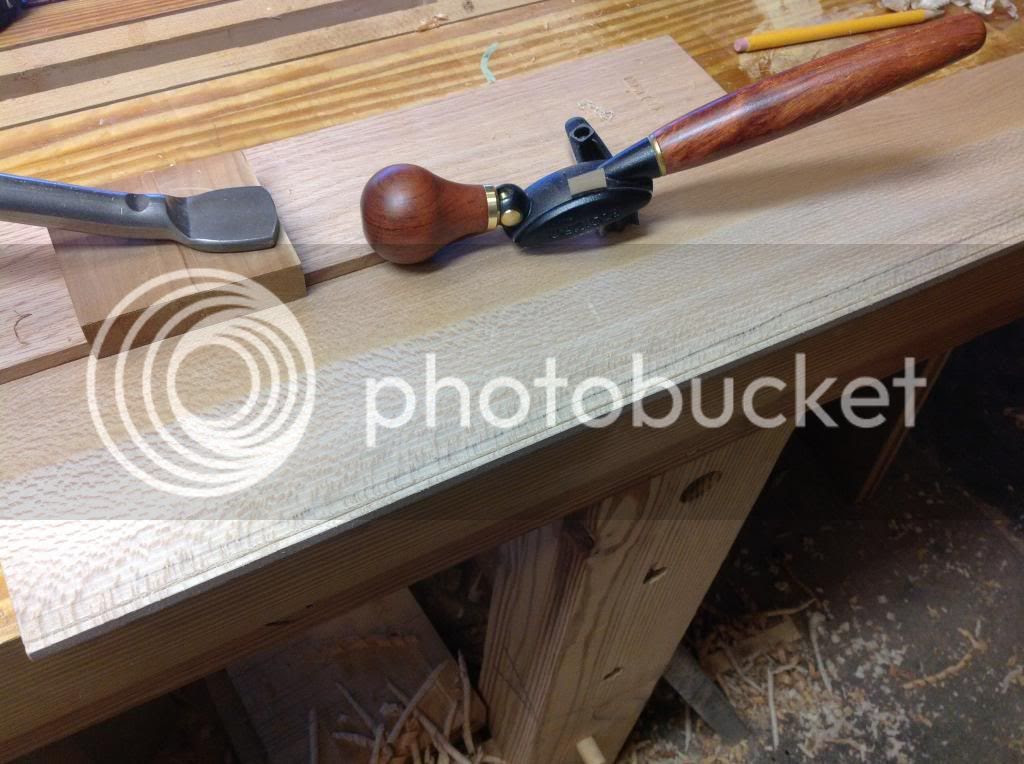 Back set in the box: 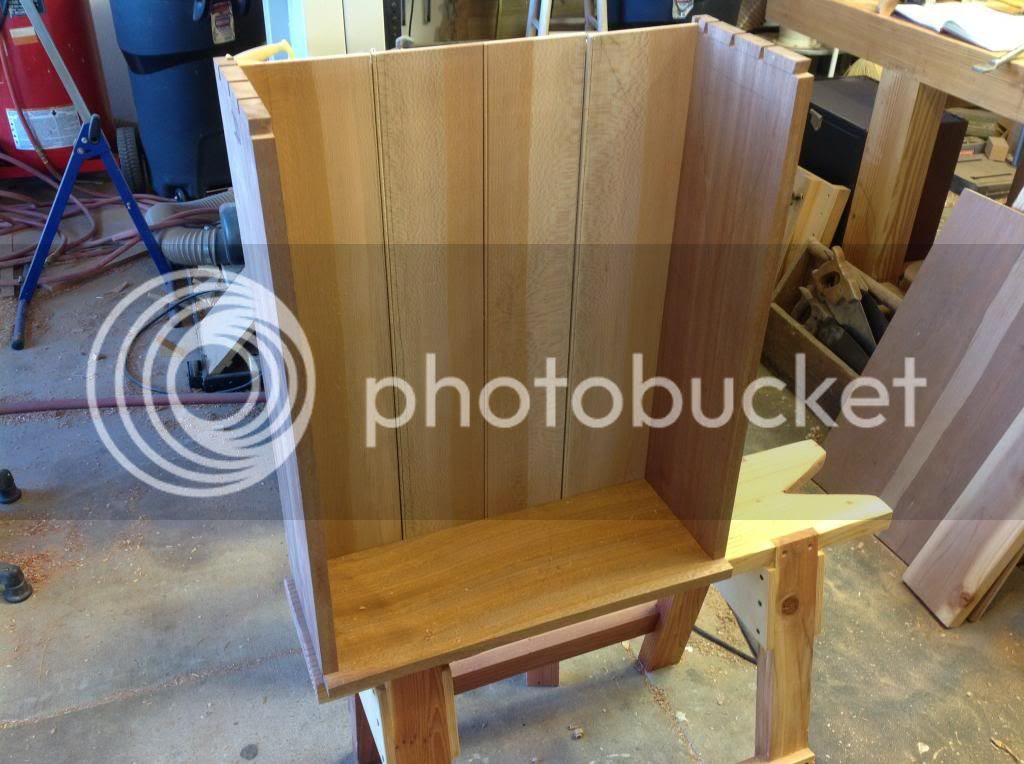 I had dug out my old Record 78 for the first couple of rebates just "because", it didn't take long to go back to the LV Skew Rabbit.

The box is coming along with few mistakes. Baring any major brain farts making the doors I should have a nice box. Then it will be on to making a stand for it. Ms OK has been bugging me as to "why" because "no one wants a box on a stand". She may be correct, if so, Goodwill may end up with a nice box on a stand.

As I move to a greater use of hand tools and away from machines except for grunt work I've needed a saw bench but there has always been some other project higher up the food chain. I've been off the day job since the 21st. and most of the high priority honeydos have been cared for and even better I had a stack of redwood cutoffs from the deck build that were perfect for a saw bench. It made a quick satisfying project, kinda like framing a building and now I have a stacking saw bench and horse combo. They should see good use if for nothing more than a place to sit and enjoy a cup of tea. 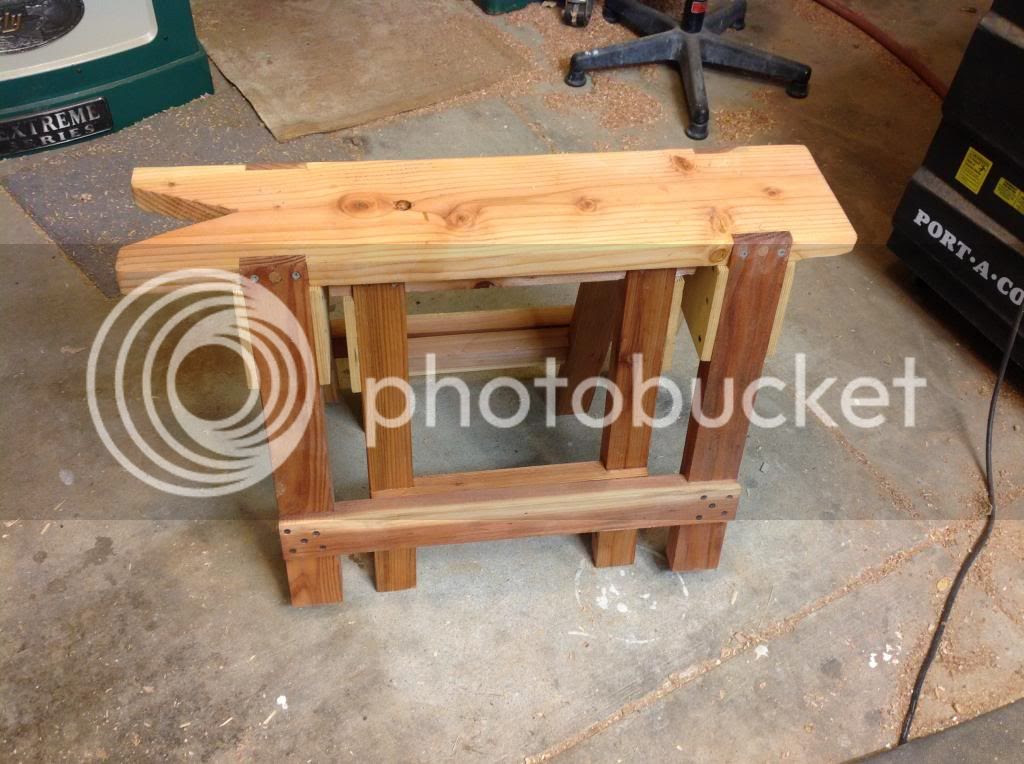 I've had a leg vise on the new bench from the get go, while it has worked OK there were some things about it that were livable but my old 1970s Paramo quick release just did them better and easier. I bought a "crisscross" thinking getting rid of the parallel guide and pin would help. After looking at the installation instructions and measuring my chop I had second thoughts about even keeping a leg vise. The crisscross would be a very difficult install with the bench upright, an easier install laying the heavy sucker on its side to do the work, but nah been there done that, ain't going to do it again and the leg vise would still be slow changing from thin stock to wide.

Bottom line several months ago I did a temporary install of the Paramo and worked with it for a couple of months before changing back to the leg vise. Since then I've gone back and forth, install the crisscross and keep the leg vise or do a permanent install of the Paramo. One of the problems with Paramo was where to do the install, on the left side of the leg would put it a little close to the end. On the right side a little too much towards the middle.

I'm not sure what happened but after working on the bench most of the morning I pulled the leg vise off, whacked a big hole in the side of the bench top and did a permanent install of the Paramo. The leg vise sure was pretty and the Paramo is butt ugly on a Roubo style bench but what the hey, it works better. I ended up putting it on the right side of the leg, the photo makes it look like it is in the middle of the bench but the chop closes about halfway across the leg and it is in a pretty good spot. If I had built the bench for the vise the leg would have been maybe 60-70mm closer to the end of the bench top, so the vise is pretty close to optimum position.

There is still some clean up to do and leg vise hardware to remove but it's functional. 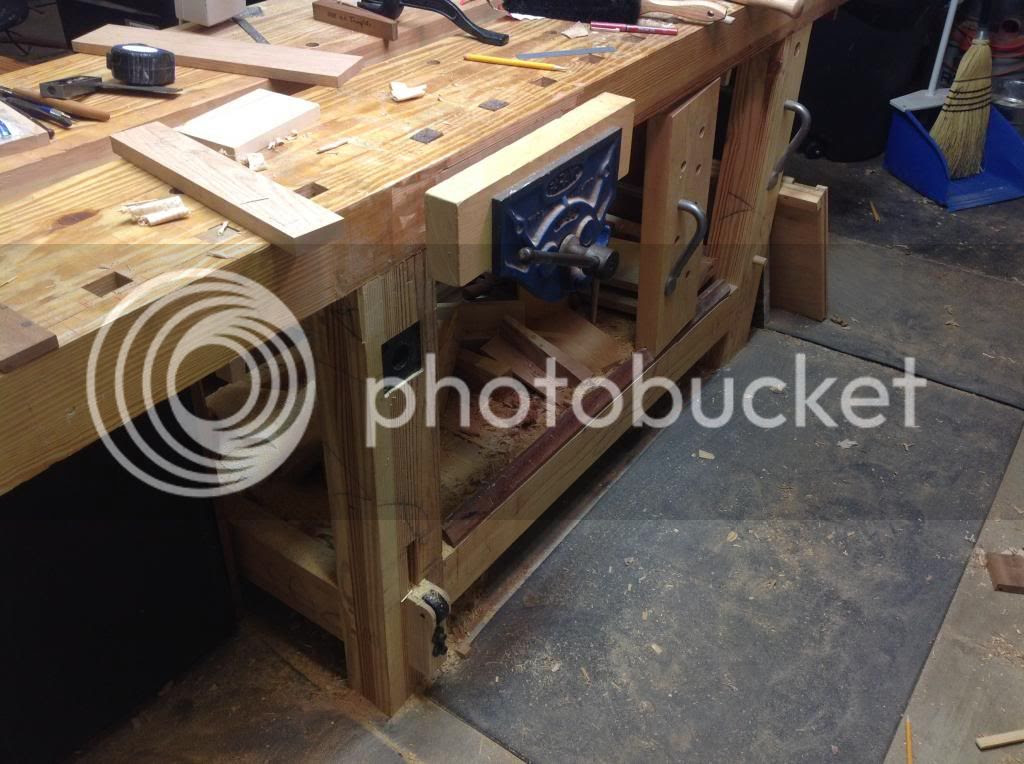