MsBubba after 15 or 16 years, we are not sure, decided to make a honest man out of me. The 22nd was also my 75th Bday, damn time goes by fast. I guess MsBubba is now MrsBubba.

The kids came out from Houston to help celebrate and Jamie did the ceremony. A few friends also showed up for food and drink. Out of 75 this was the best. 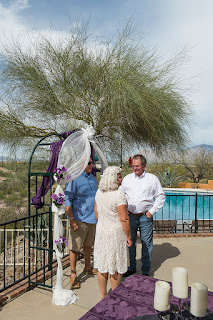 One of the family: 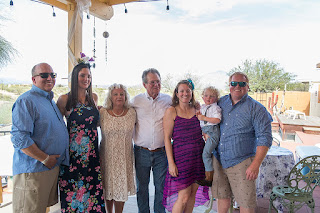 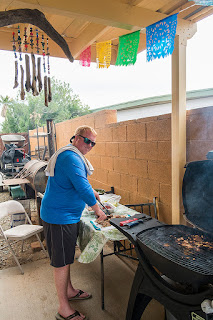 eBay can still work but the noise to signal ratio is high and I think getting higher. That said the other day I found a hidden prince among the frogs. A little back story.

ECE traditional planes are one of the true bargains in the wood working world. For either ECE Smoother or Jack Highland Woodworking asks $110 USD. With either you get a plane with a good iron and cap iron that is usable right out of the box. Used Stanley's approach that price point and they will many times need work to put 'em to work.

Some time ago ECE went from the traditional "eared" escapement to a crosspin type escapement. I have both types and in truth both work well but from an aesthetic point I like the eared escapement.

Cut to the chase: While looking on eBay for Marple chisels and fillister planes I came across a "eared" ECE Smoothing plane that appeared NOS with the iron still in the wapper and in a box for about half the price of a new plane from Highland. It arrived the other day and it was NOS, every once in a while eBay works.

After sharpening the iron and on a small hunk of pine: 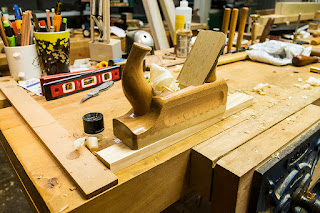 The differences between the ECE Smoother and the Jack are small. The Jack is a couple of silly mm's longer, so little unless they are side by side you would not notice and the Smoother's iron is bedded at 50 degrees vs. the Jack iron at 45 degrees. With a second iron the Jack could fill both functions.

Both planes side by side showing the difference between the "new" escapement and the old traditional "eared" one: 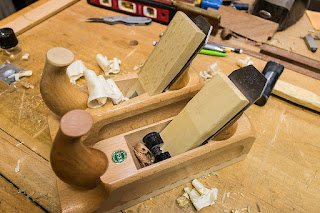 I have no need for a name stamp. If anyone ever wanted to find out who made something of mine all they need is a DNA test.

The critters made sure I didn't get a lot of sleep tonight. First it was Sam at 2330 wanting to go pee, then Maggie needing the same at 0130. In between It was fitful in and out sleep. After Maggie's wake up woof I couldn't go back to sleep. Of course both critters are in their beds and snoring away. I'm the only fool awake and chopping mortises.

Which brings me to the DNA. As usual I haven't a clue when or how, I was just beavering away when I noticed a puddle of blood on the leg I was working.  After a quick inspection of both hands I found the source, the outside edge of my left palm. Now the question is how in the hell do you cut yourself there.

I have a 0800 "show" this morning, hope the bleeding stops in time to finish up the last through mortise before donning the monkey suit. Whatever, when I finish and make it home it is back to pulling wires and installing outlets.

Have I Ever Told You How Much I Hate Pulling Wire

MsBubba wants lights in the back garden. Our house was built in the 70's and did not have a single external outlet when we bought it. Over the years I've added a few but not enough to keep the boss happy. A couple of problems with adding circuits is the house's main load center is full as is MsBubba's studio load center and about the only other source is the shop's load center. The bad news is it is full as well but there was one 20 amp breaker that was a single. I changed it out for a 20 amp double and started pulling wires. After spending most of the morning cussing and muttering and with only two trips to HD I have wire to a junction box under the patio roof. Over the next couple of weeks with more cussing and muttering along with more trips to Home Depot I'll add three or four outlets and some lights over the patio bar.

Before I was rudely reminded I had promised to wire the back garden this morning I was making good progress on the travel bench. The top brindle joints on all four legs are cut and two of the four stretcher through mortises are finished. With one good day in the shop I can finish the base. Problem is between work and the Grandpeanut coming to Tucson in a couple of weeks I'm not sure when that one good day will happen.

A photo of the legs in progress: 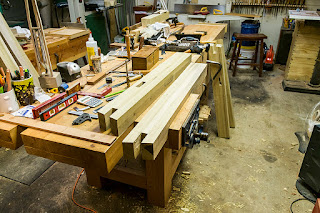