I Just signed up for the MTF's RAT (Ride Around Texas) http://www.mctourer.com/rides/2010/FoundersFeast/RAT.html. Been down all the roads but not in this short a time, should be a hoot.
Posted by I'm a OK guy at 5:18 PM No comments: 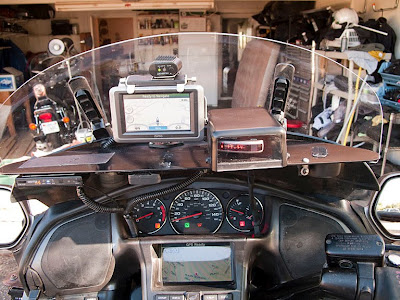 I finally got enough of the 50CC acquired bugs off so you can see the shelf. It worked great for the MTF's 50CC as is, the only two things I wish I had had time to add before leaving (and will add before the Utah 1088 ) were a reading light and some kind of writing table/shelf with clips. I'm not sure how I will do it but I'm looking around for something that will work. It has plenty of room for another GPS and a Spot, I expect they will be coming soon as well.

It was great as a dinning table and/or junk holder when stopped, because of that it made the gas turns easier and the ride a little faster. Of course I'm pretty slow, I can't pass a Iron Butt Motel with out stopping for a quick nap, guess I'm getting old

On the just finished a 50CC across the southern US, I rode for two day with LDComfort riding tights and turtle neck shirt under my mesh riding suit. The temps were from very cool (needing electrics) to 95F with 80% humidity. I was comfortable at all times, no monkey butt, no pressure points, not too hot when it was hot and not too cold when it was cool. Really comfortable riding gear but what convinced me was after riding in the same gear for two days they were pretty ripe and I didn't have time to wash 'em out before heading home. So I went back to my old riding gear for the first leg of the return home. Now I had covered almost 3000 miles the previous couple of days in the LDComfort riding gear in a very comfortable fashion, in the jeans and UnderArmor after 200 miles my butt was screaming "No Mas, No Mas". I shut it down in Pensacola, washed the LDComfort gear in the sink, wring it dry as directed, hung it up and it was ready to wear the next morning. Wore it the rest of the way home, no pressure points, no monkey butt, comfortable when it was hot, comfortable when it was cold.....great stuff, you owe it to yourself to give it a try.
Posted by I'm a OK guy at 2:55 PM No comments:

I started the 50CC with a big sleep deficit. That is not too unusual for me I have a hard time sleeping most days. My usual sleep pattern is 4 or 5 hours a night with an occasional 6 hour night, I can go forever with that pattern. Needless to say it didn't happen on this ride. Part of the reason I missed sleep Monday night was beating up on myself for being a dumb ass and playing the "what if" game in my head. I know counter productive but what the hey...that's me.

I'll cut to the chase....Monday night was a little less that 3 hours from the last time I looked at the clock till the alarm went off and I had to go to work. After work Tuesday, I had to take care of a couple of last minute things I had missed Monday, finish packing the bike and go by AZDMV to get a new plate sticker. I didn't make it to San Diego until about 2200 and I still had to eat, turned out I made it to bed a little after midnight and I had to be up no later than 0330 to meet the witness at 0400 so I could start the ride at 0430. It didn't get any better.

I rode all day Wednesday, with stops to check into the Iron Butt Motel, making it to San Antonio 0215 Thursday morning and leaving the hotel at 0645. Can you see a dumb shit pattern here? From Monday night to Friday morning I had at best 10.5 hours total sleep, throw in a max of 1.5 hours of power naps at the IBH and I was in major sleep deprivation.

. I arrive in Jacksonville Beach a little after 0200 Friday morning go to check into the hotel and find the reservation is for the wrong day, there is a major golf thingy going on and there are no rooms. I beg and plead, threaten to us his check-in desk as a IBH and promise that I will be out of there by noon. I finally get a room, go out to the bike and have another dumb ass moment....I can't find the sheet with the name and address of the ending fuel station. I go back in, ask the desk clerk if he knew which station was being used and he said "I believe it is a Gate station". Back out to the bike, look for nearest Gate fuel station and it is just around the corner. Someway manage to keep the bike upright, get the ending fuel receipt at 0252 my time (0552 EDT) go back to the hotel and fall into bed. I can't go to sleep, I stink so much from the heat and humidity I'm keeping myself awake, not only that my riding clothes smell even worse. I get up put my riding clothes in a plastic laundry bag, seal it and hop in the shower. Finally I go to sleep. My phone rings about 2 hours later, "where are you, I'm waiting at the Gate station to sign your witness form". We finally figured out I had gone to the "wrong" Gate station and he asked me to meet him in the lobby so he could witness the end of my ride and take photos of my time line and receipts. By this time it was almost 1000, I had to be out of the hotel by noon and Doug was still several hours out. I loaded up, someway managed with several stops at the IBH to make it to Pensacola, saw a LaQunita and bailed out.

After a good night's rest, food, and water the ride the next day from Pensacola to Junction was one of the best ever.
Posted by I'm a OK guy at 2:50 PM No comments:

. Two nights of riding some of the most deer infested roads in the States will kick your butt. BTW, I don't know if the 4G's are a good deal or not. One thing for sure You can see the deer, I thought about turning them off because while I would know the deer were there, I wouldn't "know" the deer were there. Both stretches are close to 500 miles and I couldn't force myself to run over 65 mph on either. Makes a real long night.
Posted by I'm a OK guy at 2:47 PM No comments: