Several weeks ago the girl child and hubby drove from Houston
to Tucson to visit and exchange their Honda Fit for our Dodge Cummins Diesel truck. They needed more truck, we needed a smaller "Toad" for the motorhome, sometimes things work out win win.

I was building a side table that had one of MsBubba's mosaics for the top as a Birthday present for Loo. I hoped to have it finished in time to go back to Houston with them but as usual I'm a little slow. The top was ready to go but I hadn't finished the base. We sent the top on home with the kids to be followed by the base once finished.

I put the first coat of Danish Oil on the base a couple of minutes ago and hope to go see my UPS girl in a couple of days. It will be good to get it out of the shop.

BTW, the mosaic top has a Sapele border and the legs are also Sapele. The aprons are some Cherry I had in the wood pile. It's not the best table I've made but.....


I thought I had a photo of the top but maybe not. Anyway here is the finished base. 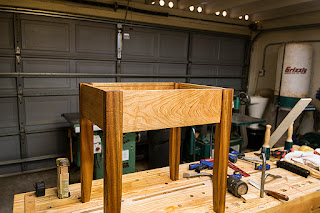 Several days ago Lance Mannion posted this: "Felt my mortality weighing heavily on me this morning. Tried to keep the demons at bay by telling myself I could be around for another 30 years.  The demons laughed. What's the point of that? they asked mockingly. I had to grant them the point.

Thirty more years? Might be a pleasanter prospect if I and nobody I knew were going to age and things would continue on pretty much the way they are. Not a lot to look forward to as it is.  Not much I'm going to contribute with my persistent presence. I'm done. It's somebody else's turn. Don't want to die but not excited about living. Lately I've caught myself having fantasies that are influenced by Philip Jose Farmer's Riverworld novels except that instead of dying and being reborn down river I'm reborn back upstream and wake up as my twenty year old self, a young hero with prospects again.

These were pre-dawn thoughts. As soon as it got light I got in the car and headed for McDonald's. We're up at the old Mannion Homestead for the weekend so I drove down to the river and had my coffee on the riverbank...

I don't see much point in living thirty more years. Or twenty. Or ten. But contemplating (the) view...With a good cup of coffee? Continuing on another day seems like a good idea."

Tomorrow is Juneteen. In a just and meet world it would be celebrated along with the 4th. That is not, speaks to who we are.

Back from Rocky Point and only 3 lbs. gained. Not too bad considering the number of tamales and tacos consumed. Have I posted that travel by Motorhome is the only way to go? Room for critters, food and drink at hand, and a head when needed, and most of all is the view. It doesn't get any better.

A view out the window on the way down between Tucson and Why. If you are a motorcycle LD Rider you probably know of Why, AZ. One of the bucket list rides is Why, Why Not.

What I love about roads in the Southwest is you can see the future, sometimes an hour or more ahead.

The view out the window in our camp site:

I call these two "Can't Anyone Play This Game:

One of the best parts of the whole trip I didn't get any photographs of. While floating in a protected area at low tide we ended up in the middle of close to a hundred feeding Brown Pelicans. Unlike White Pelicans which feed by herding bait fish into confined areas, Brown Pelicans feed by folding up their wings and diving into the school of fish from above. Catching a fish and at the same time scooping up a large amount of water. The pouch under their bill can hold up to three gal. of water along with the caught fish. After the dive the pelican will sit on the water with its head and bill down to drain the scooped up water before swallowing the fish. While all this is going on Gulls are in attendance hoping to steal the catch sometime standing on the pelican's back or head and pecking the pelican's bill. Cut to the chase: While feeding the pelicans could have cared less that we were in the middle of their feeding often diving within two or three feet of where we were floating.  This went on for hours, what a show.