It is a sickness I know but.....I've three new stones on the bench and one more "in the mail." Two of the stones are JNats and the other is a Norton Hard Ark.

The two JNats are Suita's from different mines and both can be considered 95% finishing stones. The only reason to go to a finer stone is trying for ultimate sharpness that is usually not needed for day to day work. The one in the mail is also a Suita but courser and will be used as a setup stone.

The Norton, what can I say but wow. I went against Doctor's orders and tried it on a O-1 western iron. The chisel was set up with a med India then honed on the Hard Ark followed by stropping. I couldn't believe how quickly I had a very sharp and usable iron. The Norton Hard Ark is not cheap for a Ark stone but damn Bubba it is fast and leaves an edge that just needs a little stropping. My new recommendation for any one just starting out is just that combination. For just a little over $200 USD you would have a lifetime sharpening set up. The only kicker is the Hard Ark must be from Norton, I've other Hard Ark stones and they are no where near as fast.

More once I've two arms to work with. 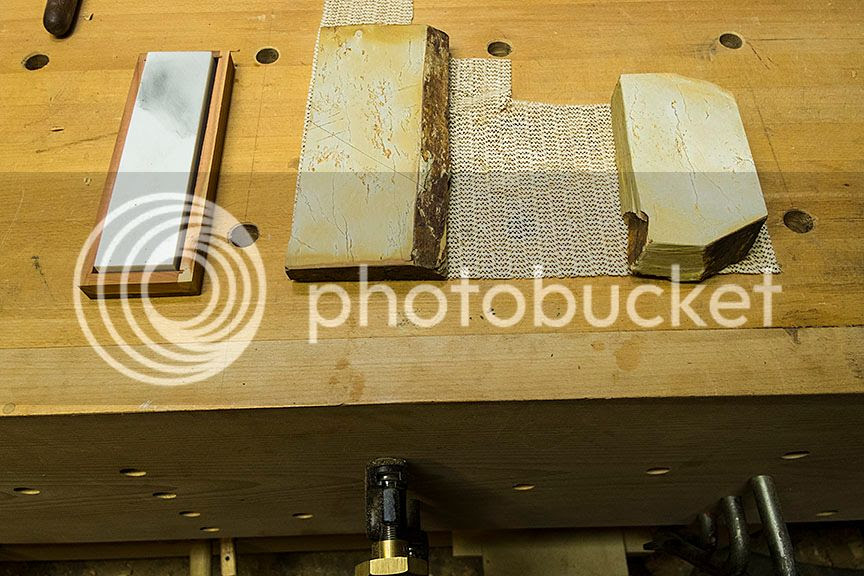 There will be little woodworking for the next three months. I had my first post-op visit and PT today. The good/bad routine was the surgery looks good but for four more weeks I'm not to use the arm, all movement must be assisted movement. Maybe after the four weeks I will be able to do light work with the right arm. It is going to be a boring four weeks, it has only been two weeks post-op and I'm climbing out of my skin, four more and I'll be postal.

MsBubba and I did manage to go to Houston last week. After a few days I'd had enough and the dogs and I did the 17 hour trek home. It is a long day....hard to believe but the trip, Houston to Tucson, is a perfect Saddlesore 1000 (1078 miles by I-10 TBMRITUS) and I would think nothing of throwing a leg over the bike for one of those. The SS1000 was an easy ride, entry level for LD Riders.

One other small change: I almost drove a diesel pusher home from Houston, had my name on the contract but .....After thinking about it I decided to stay with 5th wheels and as luck would have it the first day back in Tucson I found the perfect 5th wheel, a Carriage Domani DF300 with all the bells and whistles. Anyway I'll pick it up next Tuesday and I expect I'll make a test run down to Rocky Point, MX to make sure everything is working before the Oregon trip.

A couple of things woodworking or at least sharpening: Two of the three JNats on order from So-san arrived, there is still one to go and the Hard Ark from Norton also came the other day. I'll have much more on the Norton Hard Ark later but as a teaser; I could see it with a medium India and a strop being a goto system.

Woodcraft had a box of POS loupes out the other day. I'm a sucker for POS items because they are usually cheap and sometimes useful....many times a solution looking for a problem but what the heck, as I said I'm a sucker for 'em.

These loupes had LED lights for each lens and was marked 30X22mm and 60X12mm. I'm not sure if it is because of the LED lights or good optics but even the 60X12mm lens is useable. That isn't often the case.

I used the loupe, both lens, to check the bevel and back of a couple chisels I sharpened the evening before surgery. One chisel was a 18mm #1 White steel oire nomi, the other was a 1/2" Ashley Iles HC Steel traditional Western chisel. Both had the bevel set on Atoma diamond plates, then cleaned up on a JNat Tsushima Nagura and finished on a hard Aiiwatani Kiita.

When finished both the bevels and backs of the chisels showed a nice polished hazy finish (Kasumi finish) to the eye with the Japanese chisel showing good clean contrast between the Ha and Ji. Looking at the chisels with the loupe reviled the "why" of the hazy polished finish. Both bevel and back were free of linear polished scratches but displayed a very fine semi-matt finish and a beautiful smooth cutting edge with no nasty bits refracting light.


JNats may be slightly slower than the fastest synthetic water stones but to my eye the finish is much better and the stones need less maintenance. The only down side is the likely high entry cost and the development of JNatitis. A difficult and sometimes very expensive disease to cure.

I expect this will be a short mistake filled post. I had rotator cuff repair this morning on my right shoulder. So I'm typing one handed with the non-dominant hand. It is slow and sure as hell not pretty.

So-san, Japan Tool, and I are still working on a JNat order. It will be between 1 and 3 stones, how's that for being decisive. I have a great super hard and fine finish stone, what I'm looking for is one or two, maybe three midders, stones that will clean up grinding marks quickly and will leave a finish that is fine enough for 95+% of day to day joinery. More on buying and using JNats as I go though recovery over the next few weeks, one thing is sure I'll have plenty of time.

MsBubba has to work tomorrow, if and it is a big if, my PTSD doesn't have me eating a pistol or playing chicken with I-10 18 wheelers before morning and/or MsBubba takes pity and kindness to a level she is not known for, I'll see you guys on down the road.

One last thing, the insurance guy and I should exchange Goldwing title for a check sometime this week.
Posted by I'm a OK guy at 7:03 PM 9 comments:

The electro-conversion went well and I'm back in a normal rhythm. I posted earlier that I planed to have the right rotator cuff repaired in October. After several days of increasing problems sleeping and using my right arm I booked the procedure for the morning of 07/11/2016.

I expect few things will be done of blogging interest for the next month or three. Shop time will be limited to one arm jobs such as sitting on a shop stool with tea or whisky and looking at all the tools. At least I have some tools to enjoy. BTW I've emailed So with a request for a Okudo or Shinden Suita JNat. Anyway I'll have something to look forward to.

Speaking of JNats and sharpening Brian Holcombe  has a very good Blog and currently has an excellent post on sharpening with JNats vs. synthetic water stones. Check out both his Blog and current JNat post, both are worth the time.