Another Day of Pulling Wire

Thirteen more days to go before I'm back in the monkey suit with a Sim strapped to my ass and I spent it pulling wires. I wish I could say today was the end but I'll still be working on MsBubba's studio's lighting tomorrow.

My shop is back to useable shape and I even found the Cherry table top I put in a "safe" place before doing the shop and electrical work. The "safe" place was really safe, I like to never found the top. Anyway, once I finish with the studio lighting it is back to my shop and I hope to finish the Oak and Cherry side table before going back to work.

Photos to follow and more when I have more,

I've spent the last couple of days installing a 50 amp shore power station for the motorhome. As with all things electrical what should be a 4 or 5 hour tops job ends up taking all of two days and an additional couple of hours this AM.

The only logical source for power was the shop load center but there was just a small problem, there were not enough lugs for an additional 50 amp CB. So first order was installing a new load center, which of course required removing most of the storage shelfs, tools and clamps near the old load center.  Add in the required six trips to Home Depot for any project and the necessary doggie butt scratching and ball throwing for any day at Casa Chaos and a four hour job turns into a two day slog. 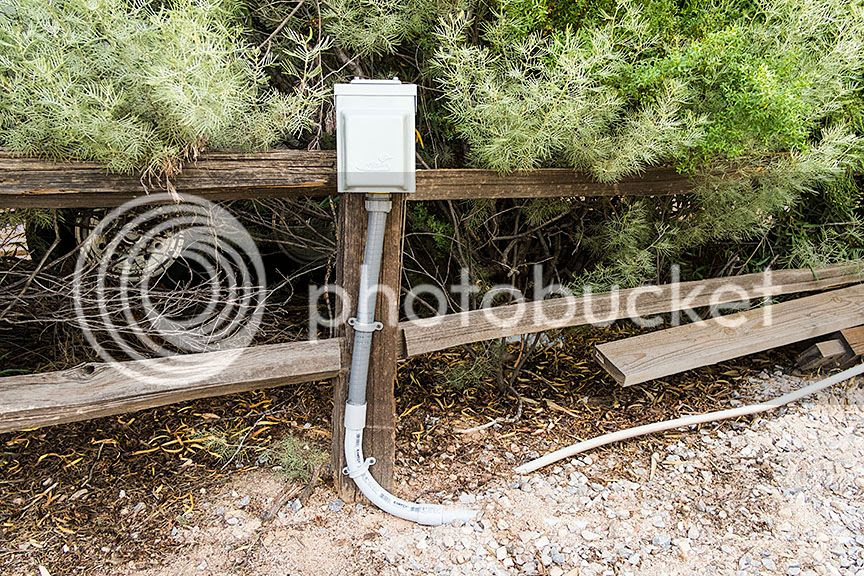 I figure there are another couple of days work before I can go back to making things in the shop because the new load center is larger than the old one and none of the old shelfs fit. Oh well I needed to work on the west wall storage anyway.

It's in the short rows. I will not be able to truly relax for another 20 or so days but....It's over.

I mentioned to MsBubba that this has been the biggest threat to the world since the Cuban Missile Crisis....Of course she looked at me blankly, getting old is not kind to your store of cultural references, and I ended up rolling her eyes to the back of her head.

Recovery from surgery and the disconnect of the GOP (Grabbers Of Pussy) during an election season has me at lose ends. I will be happy to get past November 8th (The Doc has signed me off to return to work on the 11th of November. Not a bad one-two for sanity) and return to the normal chaos of Casa Chaos with puppies, woodworking, RV's, and MsBubba taking most of my attention.

Speaking of woodworking and RV's, I'm replacing the shop's load center today. I needed a couple more slots in the load center to run shore power out to the Motorhome. A bitch of a way to spend the day but it needs to be done. Of course from MsBubba I hear "Why can you do the shore power for the RV and not install the lights in my studio for the past two years".  There is no good answer, I guess lights in her studio are next.

PS is doing a rocking chair build. I may follow along with a build of my own. I'll need to find some nice 8/4 White Oak, the last hunk of W.O. in my wood pile is being used for the current side table build. The two together might be nice, a rocking chair needs a side table.

Best of The Best

Like many big companies mine has an "reward" weekend where they bring the "Best of The Best" worker bees to the head quarters for a dinner and a "grip and grin" with the CEO. If you hang around long enough it will be your time in the barrel.

Well it is my time to waste a weekend. The best you can hope for is to not step on your dick too many times and get out of there before anyone knows your name.

All The Whisky In Scotland

Can't make it all better. In the '60's we had a chance to end the power of the racist lizard mind. Nixon, damn his festering soul, I sometimes wish I believed, because if there were a god she would condemn him to the lowest level of hell for giving the racist a home and outsized influence for the last 50 years. Trump is the result, the end product of the Southern Strategy. All the ugliness, anger, entitlement, and know nothingism of the current GOP (Grabber Of Pussy) leader and base all flow from Nixon.

Because of the resultant pandering to our worst nature by the Republican Party over following years I have maintained there are only three reasons to be/vote Republican: You are Rich, a bigot, or just fucking stupid. Today I will change that to just two reasons.

I can't get a recurring thought out of my mind that while Clinton "won" the battle tonight even more important she won the war by not putting the stalking, abusing, man-child away. Of the three possible outcomes, Trump "win", Trump "knockout" by Clinton, Trump losing but muddling through. The worst for the Republican Party was the muddling through because it allows Trump to continue but still bleeding support. What I can't get out of my mind is Clinton played this to perfection, that she didn't want a knockout with either Trump quitting or being thrown overboard by the RNC. Either option would introduce too many wild cards, the old "better the devil you know than the one you do not".

If Clinton wins on the 8th the world will be in good hands, tonight just brought it home.

The fat lady has sung her heart out. The planing bench is finished. I lowered it as posted earlier, added a apron, and a crochet. It will be interesting to see if I use it as much as I suspect I will. The few things I've planed on it, flatting the top and just did the edge of a 4/4 board just to see it work, seem much easier than on the higher joinery bench.

Anyway here is a photo, click it to big it: 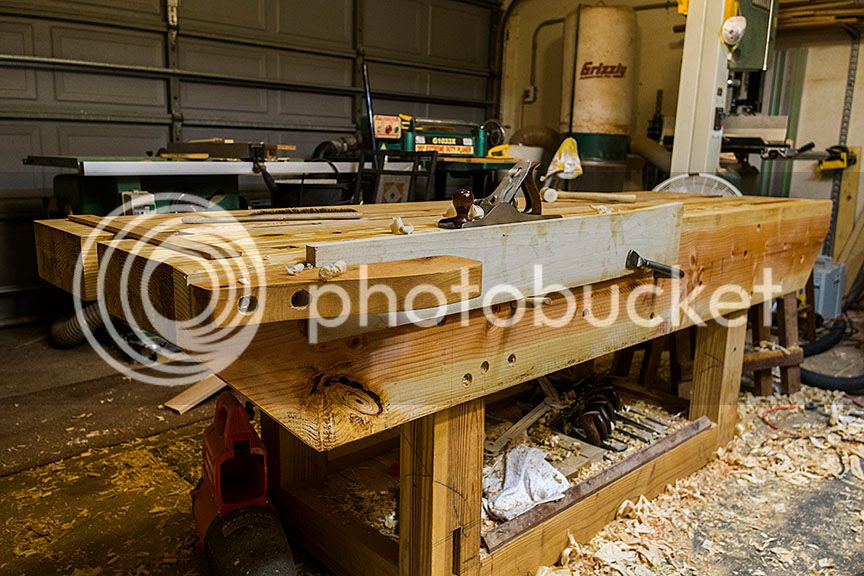 There are two more things to do before the planing bench is ready. First is adding an apron to the front and second is installing a crochet.

The front apron is in glue up and will be added in the AM and the crochet is marked out and will be installed after the apron.

Get all that installed , drill the holdfast/support holes in the apron and the bench will be ready for work.

A photo of the apron glue up, I'm adding a 2X to the back of the apron for better holding by the holdfasts. Once the glue sets I'll glue the apron to the slab and put Spax screws down each leg. 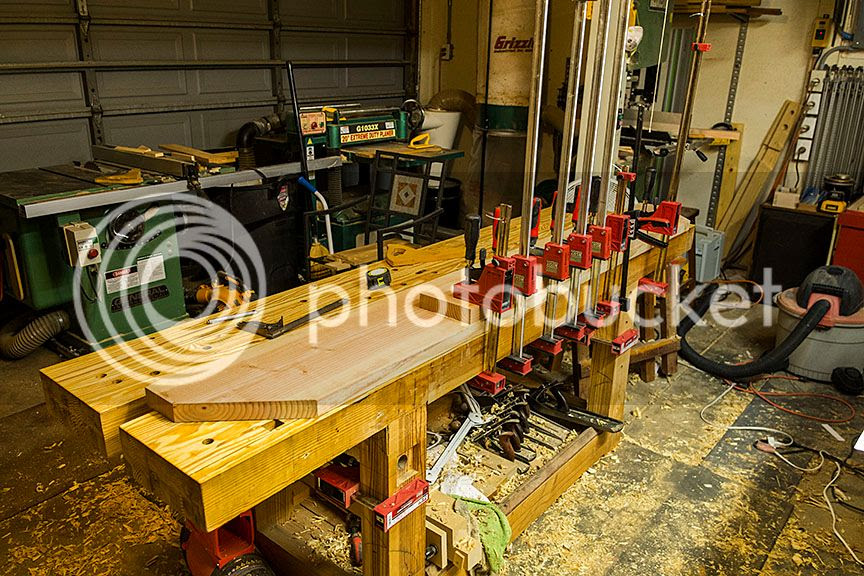 Shoulder update; PT said "Hit the road Jack, don't come back no more" this morning. I see the Doc on the 18th. and expect he will return me to work sometime after the first of November. It has been a good run, now if I can remember how to run a Sim.

The planing bench hasn't been trued in several years as it was mostly used as a flat surface to glue and finish things made on the main bench. Now that it will be a reference surface it needed truing.

The first pleasant surprise was how little it was out of true with just a slight twist, high left far corner and low right near corner, and a small belly down part of the middle. I've removed the twist and the belly and now it is just a matter of digging out the #8 and finishing up. 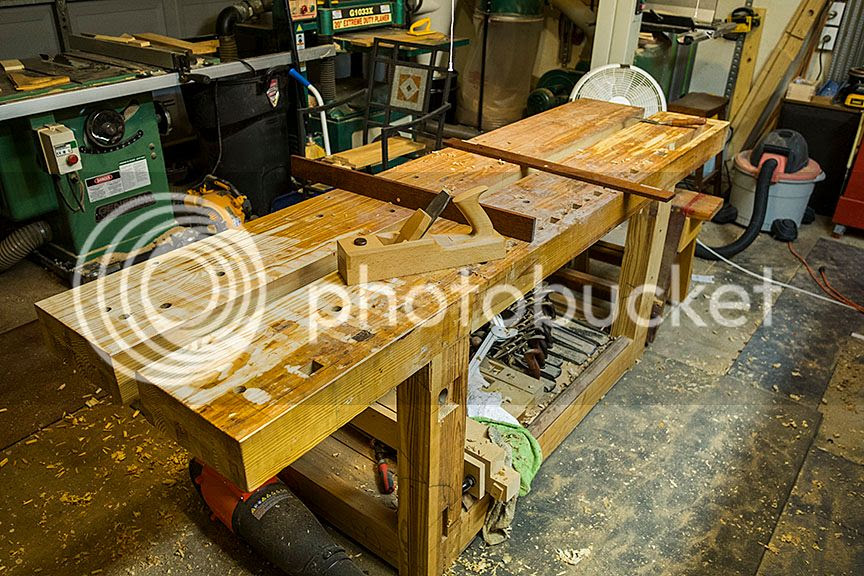 One other, maybe not a surprise, but pleasant is how much easier it is to plane on a 800mm surface vs. a 900mm surface.

I will add a crochet planing stop to the left end and see if I can find the old deadman. If it is gone (I never throw anything away unless it is something I will need later :-)) I will make another for use with the crochet.
Posted by I'm a OK guy at 12:55 PM 5 comments:

That woman is a traveling fool. I picked her up after she had spent 24 hours traveling from the UK to Tucson. On the way home I asked if she would like to go to Mexico for the weekend, with an aside that I would understand if she wanted to wait a week or two. Answer: "Sure, let's leave early AM". BTW, she knew there was a new RV in the drive but was skeptical about it, she thought it was too big.

About half way to Rocky Point she looked at me with the "damn I hate to say this but you were right" look and said: "You were right, this is really nice". I wish I'd had a recorder going because it doesn't happen often.

Anyway we spent four days and three nights on the beach in perfect WX watching the dogs swim, the pelicans feed, and the porpoise porpoise. In between I ate a ton of tamales, had a beer or two and napped when it all became too much.

Bubba 1 is a dream, set it on 1700 RPM (slightly over 60 mph) and I appear to get about 10 mpg, sometimes a little more and of course sometimes a little less. With a 90 gal. tank it has an effective range of about 600 miles. Pulling the 5th wheel most of the time a little faster than 60 mph but maybe only a mile or two better milage and the difference in comfort is an order of magnitude.  I should have lost the 5th wheels years ago.