As is my want, at least once but usually several times a year my heart over comes my head and I bring out the winding sticks, scrub plane, and the big boys. This year a 700mmX200mm hunk of rough sawn 5/4 Cherry was the chosen victim. 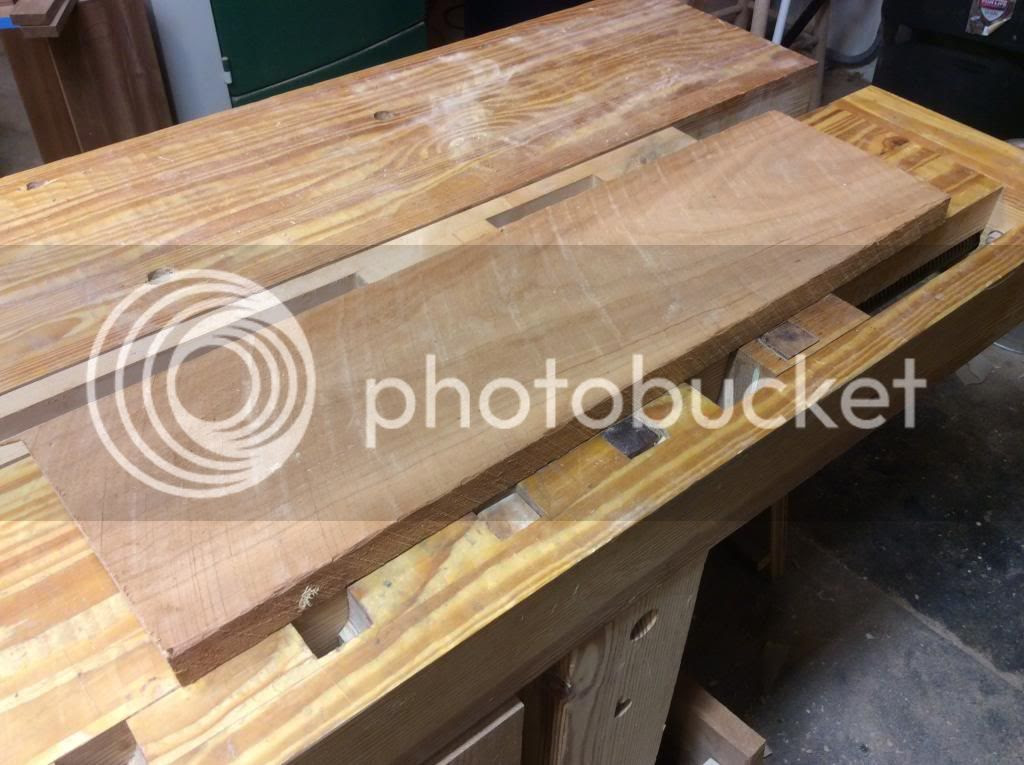 I tell myself it is to justify the shop space devoted to the big, heavy, noisy, dust producing machines setting near the front of the shop. It's true, my production would go down even farther than the already slower than slow rate it is now but damn I would be a buff OF if I did this every day.

This board has a pretty good cup and bow but not too much wind. Here is a photo of the cup side: 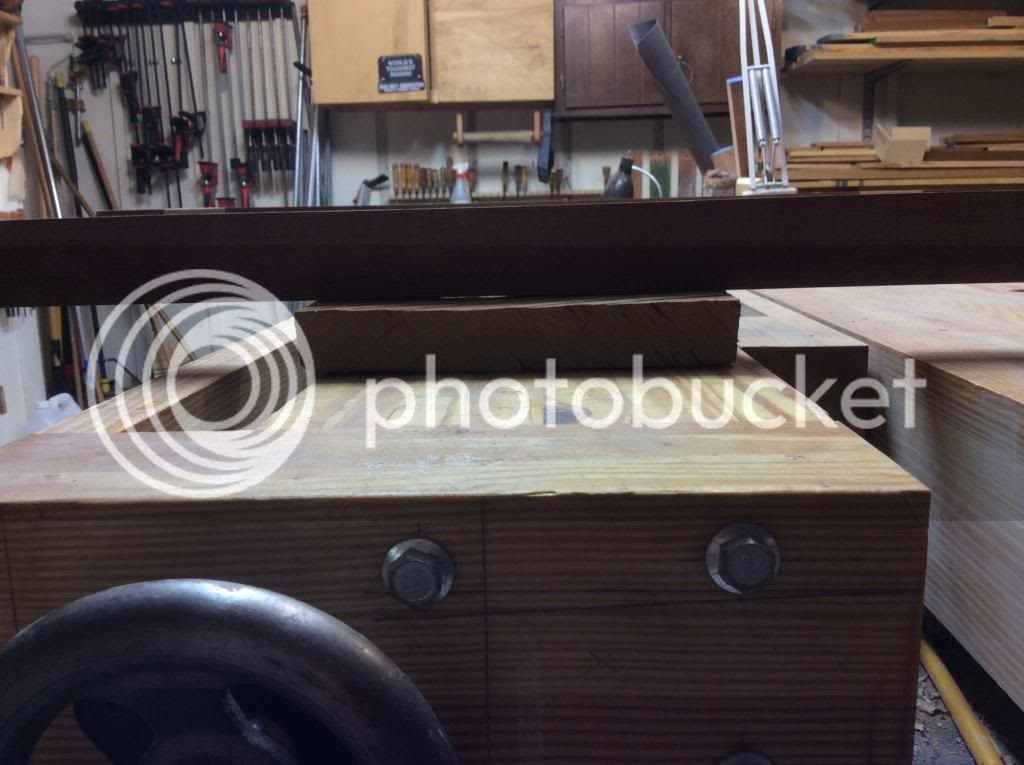 I scrubbed flats on the high spots so the board would lay flat on the bench: 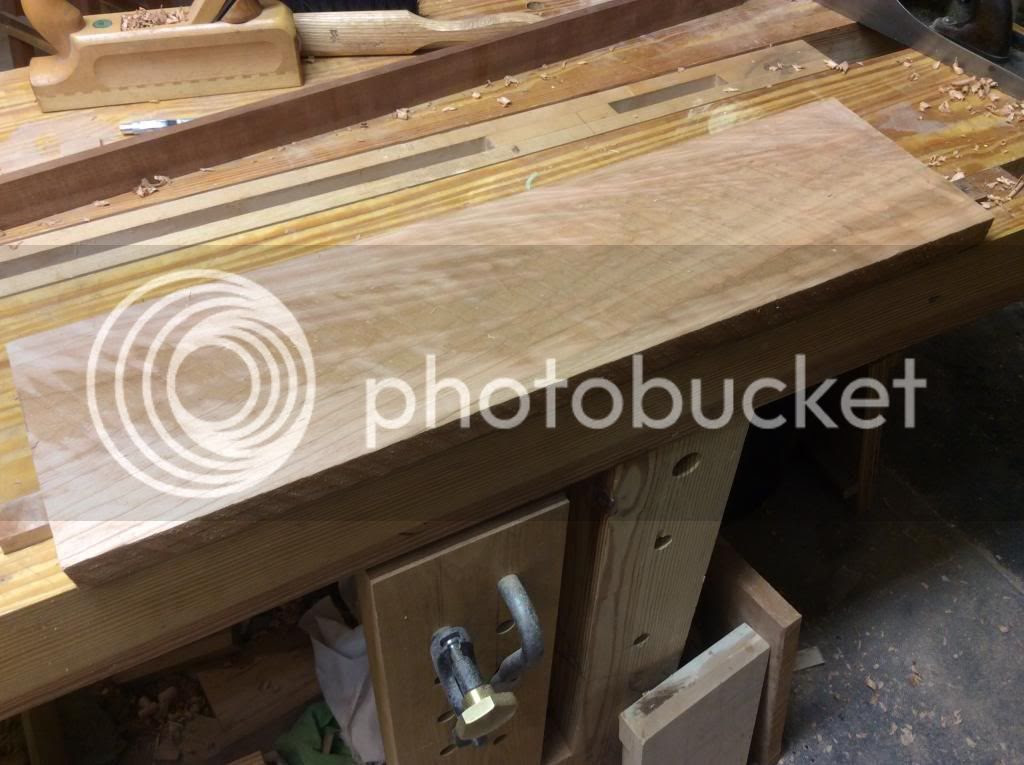 and started on the bowed side: 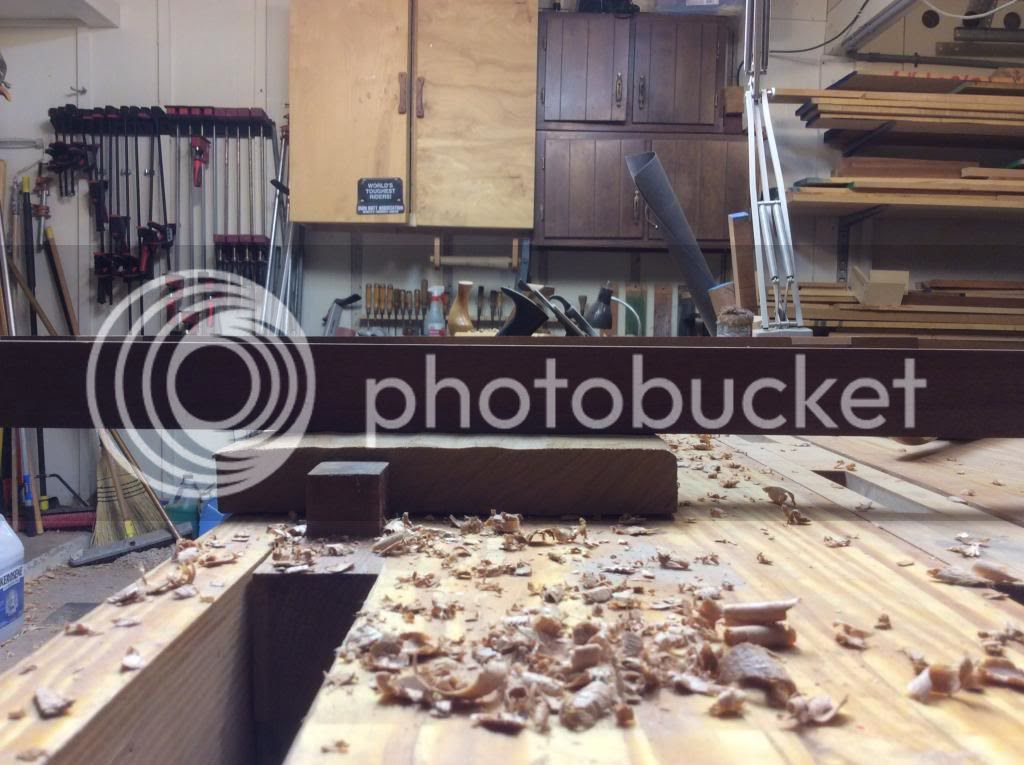 You may be able to to see (if you make it big) the pronounced bow on the left side and a bit of wind left to right. Worked it all out with the wood scrub plane and the old Stanley #5 with the heavy cambered iron. Then finished it off with the Type 8 Stanley #8. It is another post but damn I love me some early, Type 11and earlier, Stanley's. Put a Hock or LV O1 iron with chip breaker in 'em and there is no better plane.

With the first face flat and true, I used a #3 to put a "dip" in the middle of the edge and the cambered #5 to bring the edge square to the face. 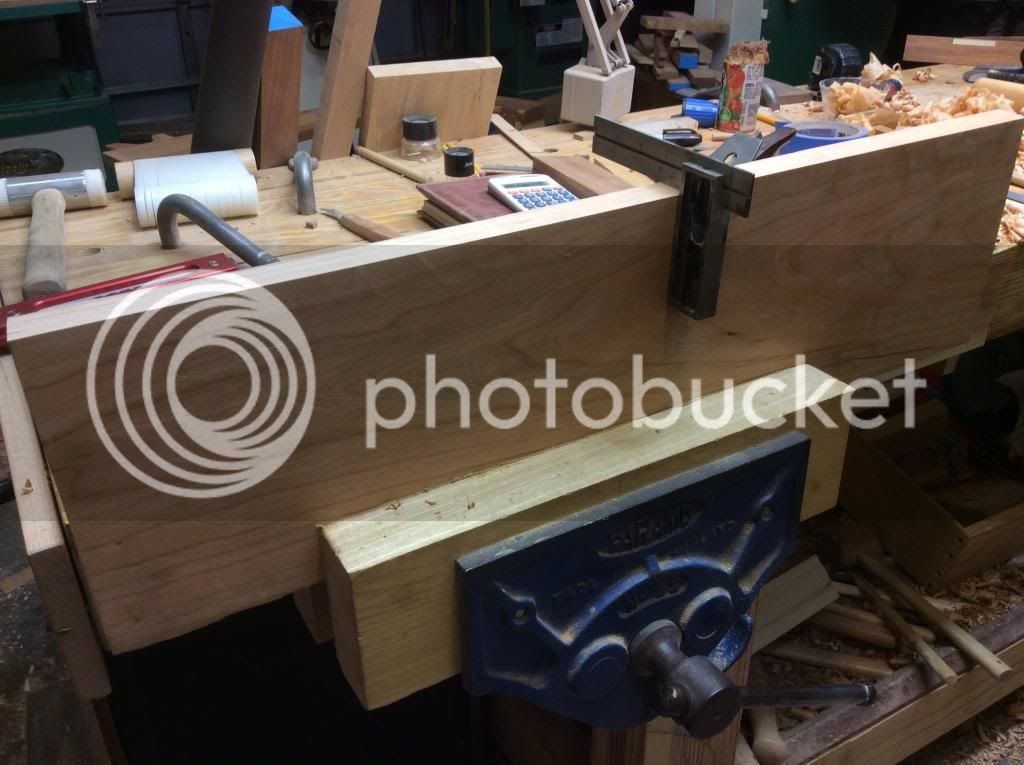 Then finished off the edge with the #8 and marked the width to 25mm: 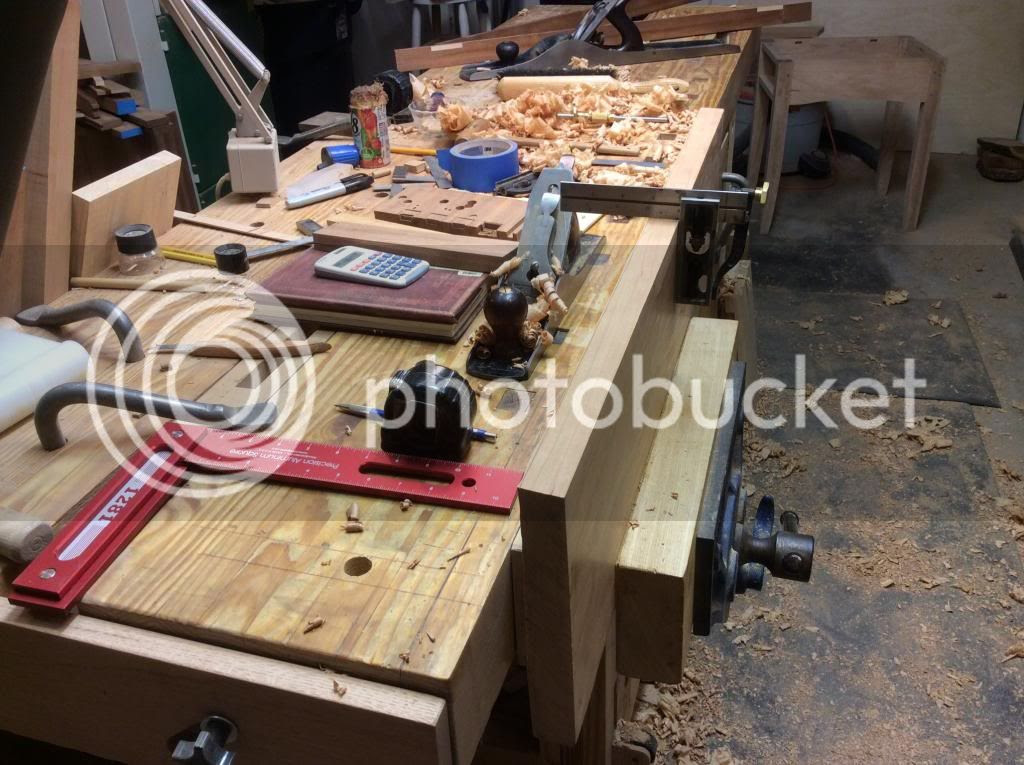 Two down two to go. That's where I quit for the night. I should have enough board to end up very close to 25mm or a full 4/4 board, if not it should be very close.

It is a good workout, made more so because my bench is set for working with finished boards. I've been thinking about making a new bench, just because I like to build benches. I have room for a second bench and it would be nice to have one lower for using to prep stock. If I do I might have to re-think the new bench, I had been planning on making a "pretty" bench out of Beech instead of the usual SYP. Pretty may wait.

It's Better to be Lucky than Good

Back in the day.

Like all OFs the older I get the better I was but back in the day I could fly an airplane, not airshow or combat type flying but I could take a Multi Engine airplane and keep it in its protected airspace almost no matter what the Sim Instructor and/or Aviation gods decided to throw at me that day. But....I've always known the real difference between dying in the old folks home pooping in your nappies and the last words you speak are "Oh Fuck" heard over the cockpit voice recorder is pure blind ass luck. Skill will make you luckier but if I had to choose one I'll take luck any day.

Not quite on the the same level of living or dying but this morning I had a little pure blind ass luck in the shop. Through inattention to markings on the rear apron I chopped the button mortise and a small relief curve on the the wrong side of the apron. Here's where the luck comes in, the joints were to be draw bored so if the tenon was shorter than the mortise no big deal and with the shortening of the tenon the draw bore hole moved enough that I could re-drill the draw bore hole in the tenon and still have structural integrity, add one more bit of luck, I almost always center my tenons so flipping the apron made no difference in appearance.  Bottom line, luck saved the day along with a little age, I can't tell you how close to firewood the table came this morning.

Here is the table draw bored and glued (belts and suspenders don't ch know) waiting for the the glue to dry so I can start the drawer and top. 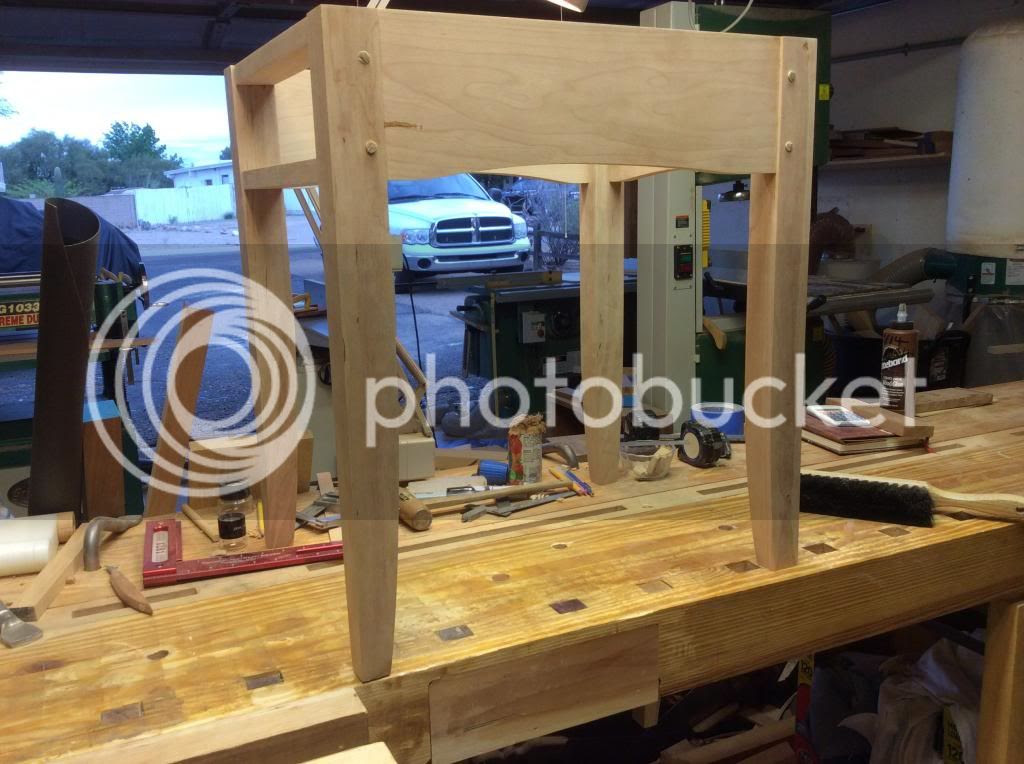 I know better, I've learned this lesson too many times yet I'll also bet this will not be the last time for a teaching moment. Bubba don't do anything in the shop other than sharpen and clean iron when distracted by work, life, or pain.  You will screw up....no maybe, no you might get away with it this time. You will screw up.

I guess I'm lucky, if I can find the board I cut the aprons from I can recover and no one will know any different but the last of the side tables may have a back apron that matches the drawer face or what ever....I know, I designed it that way. That may be my story and I'm sticking to it.

Problem is the screw up is too dumb to cop to.....big red markings pointing this side up on both sides of the apron, who can read, I had top button mortises to chop and a relief curve to cut on the bottom....BTW the relief curve was very nicely done as was the button mortice...just on the wrong side of the apron instead of where they belonged.

This table may be moved to the unfinished projects pile for a few days, I'm too pissed to work on on it today. On second thought, I've wanted to do my annual four square a rough timber and that was going to be the next project, to prep a rough timber and make a small box with out using any of the shop's machines with the exception of the band saw. I know there is a rough Cherry board in one of the wood piles. By the time I have found it and have it trued and sized my guess is I will have worked pass being pissed. Physical labor can clear the mind of trivia.
Posted by I'm a OK guy at 8:02 AM 2 comments:

Slow in the Shop

I've a high pain threshold, once flew for almost a month with a broken jaw, same story with a broken arm. The arm was a perfect example of dumb ass...needed something just out of reach in the shop, there was a ladder on the other side of the shop but a 5 gal paint bucket at hand. You know the outcome, step on the bucket, bucket goes flying...gravity is powerful shit. Anyway last week I had oral surgery and either my pain tolerance has decreased or it was more than advertised. It has kicked my ass, about all I have done is go to work, come home take enough pain meds and Gin to go to sleep and then get up and do it all over the next day.

Anyway today may be the turning point, made it home, the pain was just a little background noise and I put off the self-med routine and worked in the shop for a couple of hours. I shaped the legs, drilled the draw bore holes, cleaned up the rails, and put the table together to mark the draw bore holes on the tenons....one of the shoulders didn't pull up as tight as I wanted....my guess is one of the tenons is butting up against the other and needs to be trimmed. Whatever I ran out of gas at about that time, tomorrow I will pull it apart, fix what is binding and mark and drill the draw bore holes. It's good to be in the short rows, I'm ready to move on to a different project.
Posted by I'm a OK guy at 8:38 PM No comments:

I was at the local Woodcraft store a couple of days ago and they had a Woodpecker 1281 square, one of the guys there said he had one and really liked it. What the hey, it's only money and I need a good square so it followed me home. All I can say is.....it is a damn good square. Normally I like a square that is smaller but its size is not a problem. I'm really pleased with how easy it is to use, the only problem it is marked in inches and I work in metric. Not that I use the markings on my squares but I may get a metric one to go with the fractional one. I just wish they made a 6"/150mm version as well.

I'm in the short rows on the third side table build, the tenons are slipping in with minimum work, shaping of legs and aprons to follow along with the drawer. I may finish it over the weekend but most likely it will be sometime next week.

I'm ready to get the side table off of the bench, it's that time to do the once a year rough lumber to 4 square exercise. Some day I will finish and decide to sell all the machines, I doubt this is the year, but.....it could happen.

I've the new work bench designed in mind, Beach top about 610mmX2450mmX115mm (24'X8'X4.5" for the folks still stuck in the inch, stone, foot world). made of Beech with a Douglas Fir base. A Veritas end vise, my old English #52 face vise and round dog holes. Things it will not have, a sliding dead man, square dog holes, and split top.

I had oral surgery last Friday, it has kicked my ass. The last time I had oral surgery back in 1993 I ended up with a metal plate to hold my jaw together. This time feels much the same, I hope I can grab someone by the short hairs and make them understand the problem before it gets to the metal plate solution.
Posted by I'm a OK guy at 9:03 PM 2 comments: