Life as an ExPat 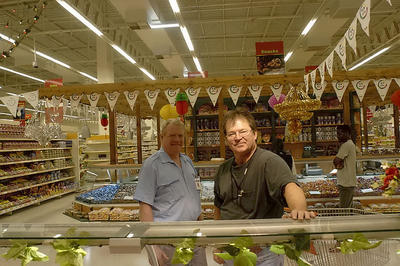 When living in the third world small things make a big difference. Meat, except for pork, is no problem in Khartoum. It is cheap and very good, whole beef back straps run less than $20 US, I bought a couple of dozen lamb rib chops for a little over $10 US the other night. Grilled lamb ribs, rice, and some cucumbers in yogurt make a great meal. There are a couple of things missing...vegs and cheese. Today I found cheese, wonderful, beautiful cheese. cheddar, blue, swiss, even a couple of soft ones. Life is good.

BTW one of the local cheeses would make great enchiladas if only I could find some masa.

Now all I need is a source for some good tomatoes, asparagus, or lettuce. I would kill for green beans :-) .
Posted by I'm a OK guy at 9:00 AM No comments:

Damn he is good.

For a tuff-talkin' Texas, President Bush is awfully punctilious about reporters' trying to double-dip questions during press conferences. During the one wrapped up a bit earlier today, he took a sarcastic swipe at a foreign reporter for picking up the "American trick" of asking two questions when the quota is one per customer. He's a stickler about that. Before the war Bujsh didn't know the crucial dif between the Sunnis and the Shiites, according to a NY Times magazine piece (on the eve of invasion he had to have it explained to him by an Iraqi exile), but this sort of infraction he pounces on like John Simon affronted by a dangling modifier. The press con itself was mostly a familiar reiteration of his War on Terror halftime pep talk; more interesting was the byplay between Bill Kristol on Fox News and the shiny host, whose name escapes me....

Max Sawicky has some very good Dutch-uncle advice for those of us who care primarily about the substance of government policy:

MaxSpeak, You Listen!: COMMON SENSE: Determine the major policy challenges to come, fasten on the best solutions, and hammer away in the confidence that time will validate your message.... Three examples:

I think the arguments supporting these are very solid. If nobody makes them, we'll never get there. I don't have to run for public office, so I can make them. Politics is beyond me...

I’m in Khartoum. What a zoo this last week has been...UPS lost my passport with my Sudan visa. Our Washington office shipped it UPS "next day air" last Thursday to McMinnville, it made it as far as Louisville and no farther. Long story somewhat short...after working with UPS Monday and Tuesday I decided to go for a new passport and visa. I flew the company’s C-206 to Seattle Wed. morning and got a replacement passport then flew back to McMinnville to get on a redeye flight to Washington D.C. Wed. evening. I was on the Sudan Embassy’s doorstep Thursday AM. After 30 straight hours of go, go, go I had a passport and visa in hand. Needless to say once I made it back to my hotel and had some food, other than airline peanuts, and a couple of beers in my belly I crashed.

After resting most of Friday I started another 24 hours of travel on Saturday. This time on Lufthansa, the good news I was able to use our airline ID to upgrade. What a difference it is between the front and the back of today’s airlines. The seats did everything from making a bed to rubbing your back, all at the touch of a button. The food was eatable and the booze flowed. I’m still rummy from lack of sleep but all in all the trip over wasn’t too bad.

The C-206 flight was interesting...it was the first time I had flown a 206 in over 30 years and almost that long between single engine cross-countries. Two things stood out...first: damn it was slow, second: it was a lot of work and this was a pretty well equipped 206. We forget how hard it is to do everything solo with equipment that is not top of the line.
Posted by I'm a OK guy at 7:14 AM No comments:

I'm pissed...The Washington DC office overnighted my passport and Sudan Visa last Thursday (09 June 2005). I have not received the package...It is lost. I'm busting ass to finish closing the house down tonight so I can fly the C 206 to Seattle in the morning. I have to file for a replacement passport. Then I need to make it back to Portland in time to catch the red-eye to Washington D.C. at 21:15. I will arrive in D.C. early Thursday morning...Just in time (I hope) to go to the Sudan Embassy and, cross my fingers, have a replacement Visa issued. Then who knows what kind of connections I can get to Sudan.

I had a good flight to Sudan booked out of Portland...Most likely First Class and with only a 2 hour layover in Frankfort. What do you bet it will be the middle seat of a 5 seat row with at least a 9 or more hour layover somewhere...I'm Pissed.
Posted by I'm a OK guy at 4:26 PM No comments:

Brass: 'we won't solve this with bullets'

Military commanders on the ground in Iraq must speak the obvious truths our civilian or Pentagon leadership is incapable of saying.

A growing number of senior American military officers in Iraq have concluded that there is no long-term military solution to an insurgency that has killed thousands of Iraqis and taken a heavy toll on U.S. troops during the past two years.

Instead, officers say, the only way to end the guerrilla war is through Iraqi politics -- an arena that so far has been crippled by divisions between Shi'a Muslims, whose coalition dominated the January elections, and Sunni Muslims, who are a minority in Iraq but form the base of support for the insurgency.

Gen. George W. Casey, the top U.S. commander in Iraq, expressed similar sentiments, calling the military's efforts "the Pillsbury Doughboy idea" -- pressing the insurgency in one area only causes it to rise elsewhere.

"Like in Baghdad," Casey said during an interview with two newspaper reporters, including one from Knight Ridder, last week. "We push in Baghdad -- they're down to about less than a car bomb a day in Baghdad over the last week -- but in north-center (Iraq) ... they've gone up," he said. "The political process will be the decisive element."

After leaving the River Oaks Men’s Grill I returned to my office on Hobby Airport. I truly did not know what to do. I made a few phone calls, one was to Darrel Stewart, Darrel had an old and ugly Lear 25B he was operating and he needed someone to fly it. The only problem I did not have a current PPE in the Lear. I was typed but had not flown a Lear in at least 10 years. Darrel could give me a PPE but I had been out of the Lear so long I doubt the insurance company would have insured me with out my going to simulator based recurrent training.

Flight Safety has a wonderful program, if you are a full service customer you can go to recurrent on any other aircraft that costs the same or less than your primary aircraft. When I called FSI I still had just over a month left on my Fairchild SA 227 contract and the Lear program cost was the same. If I could make it to Flight Safety in the next month I could go through the Lear recurrent and have a fresh PPE. Even better if I could find a FAR 135 operator to let me use their program I could also get a fresh FAR 293a & b, a 297 and then all I would need is a 299 to fly Lears on charter. Darrel’s operation used Flight Safety Wichita for training. It was all working out, I could do some contract work with Darrel until I could find something full time. All I had to do was convince the downtown suits that it was to their advantage to send me to FSI Wichita. I did some fancy tap dancing and I don’t know if I caught Nick off guard or if he has a heart (if he does he hides it well) but long story short he said go ahead and go.

The first open slot was the end of December.

I'm leaving for a TDY in Khartoum, Sudan next week. It had been touch and go, for a while I didn't know if I would receive my new visa in time. My Afghanistan visa was still good and there was a chance I would be sent to Kabul instead of Khartoum. I must say the weather in Kabul would be better this time of the year but from what I'm reading people are being blown up in Afghanistan and so far that is not a problem in Sudan (unless you are black). It will be good to see my Sudanese friends and be in Africa for a few weeks.
Posted by I'm a OK guy at 8:52 PM 1 comment: