This was like many of our oversea trips...a blur of loading bags, unloading bags, taxi rides, crashing in your hotel room trying to recover from a 20 hour + day only to get up early the next morning to do it all over. Long story short...we flew to Anchorage for a meeting, then on to Khabarovsk, Russia for a tech stop, and Beijing for a RON. After a night in Beijing we flew to Macau for a day meeting and then to Hong Kong to spend the night. The next day we went to Xiamen for a meeting then back to Hong Kong so we could fly to Taipei (Mainland China will not allow flights to Taipei from their airspace) for a RON. The next day we were to come home but...when the boss showed up at the airport he "wanted to stop short and spend the night...somewhere..." The scramble to find a place to stop, to get permits, to set up hotel rooms, to get landing slots, started. BTW, we told him his best option would be to go back to his hotel in Taipei and we could start early Saturday morning for home. Nope, he wanted to do a short leg and then go home the next day. At this time we had been on the airport 6 hours with the APU running most of that time...the short part of the story...after almost 5 hours of work putting the permits and flight plan together at a cost of around $??,????USD...just as the "handlers" were walking up the air stair with the overflight permits, the landing "slots", the flight plan, just as we were less than 5 minutes from cranking our engines....you've got it..."we are going to spend the night here and go home in the morning". The bottom line...after 12 hours at the airport, Mucho $ for handling fees, and 2000 lbs. of kerosene burned we were back where we started...still 12 hours of flying from home...another unloading and loading of bags, a 1 hour cab ride on rain slick streets, two ways, and two very exhausted pilots that still needed to get a new set flight plans and permits. The good news...we left Taipei on time the next day, Saturday morning at 11:00 local, after a tech stop in Petropavlovsk, Russia we made it to Portland, OR at 09:30 Saturday morning. Did you notice...we made it home an hour and a half before we started :-) ...BTW it was a hell of a long ways to go for a bowl of noodles.

A couple of observations from someone that really didn't get to spend enough time in any one place to learn much but that has never stopped me from having an opinion or expressing it :-) ...we (the USA) are in deep dodo...the Chinese have their shit together. The place is clean and modern, the infrastructure is in very good shape, the people are smart and educated, and there are a ton of 'em, and we are shipping our money over there as fast as we can. We are screwed unless we get our act together much faster than I think we can.. Hong Kong is another world...I would love to have some time to spend there...it is also an example of how to make things work...money has been spent on the infrastructure, it is maintained, and there is an investment in the future...something that has been lacking in the States... our roads and public buildings are falling apart. We are not spending our money or our public capital wisely....maybe because our sense of community, of common cause has eroded, as we have been distracted by side shows and red meat thrown to the rubes. Whatever the reason...the result is our pockets are being picked and our country is falling apart compared to what I saw in Hong Kong and China.
Posted by I'm a OK guy at 9:28 PM 1 comment:

Michael Hirsh has a decent rundown in Newsweek today of how badly George Bush and his team have botched the war on terror...The damage that George Bush has done to the United States is going to be with us for a very long time.
Posted by I'm a OK guy at 5:39 AM No comments:

We are in Tucson. Interesting trip down…neither of us had flown for several weeks and the rust showed. There was nothing unsafe but at times it was like a couple of monkeys trying to do a basketball in the cockpit. Funny now but not while it was happening.

We stopped in Santa Monica for a couple of hours before flying the last leg of the day to KMZJ. KSMO has very strict noise regulations, to comply your takeoff path is Runway heading at 1000’MSL turn right to 265, climb at V2+10 to 3000’ MSL. The KSMO-KMZJ leg was mine. We were light with only 12,000 lbs of fuel…All I can say is “WOW” what a kick in the ass. At our takeoff weight we were only about 2 lbs of airplane for each lb of thrust. To hold V2+10 required over 20 degrees of pitch up…we went up like a rocket.

We ran into an old friend at Flight Safety TUS, while talking he reminded me of the time we were in Reynosa and I bought “pussy for the bar” with the company AmEx.
Posted by I'm a OK guy at 2:21 PM 1 comment:

It Has Been Awhile 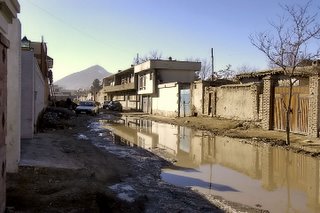 What a busy 6 months. I received my GIV type at the end of Sept and almost the first trip out of the box headed for Kabul via Iceland and Turkey. Following the Afghanistan trip I have been to Denmark a couple of times, London, Canada, and all over the States. The time really flies (sorry), it is already time to go back to Savannah for re-current.

The image is of the entryway to our compound in Kabul.
Posted by I'm a OK guy at 11:12 PM No comments: