A couple or three years ago after many years of riding motorcycles stating in the '60's on a Triumph 650 and ending riding a Honda Goldwing I hung up my helmet for the last time. It was a good time and almost as big a part of me as airplanes. Along the way I enjoyed many new friends and seeing what was around the next curve and over the next hill. I spent the last years of ridding doing mostly long distance/Iron Butt Association rides. The high lights of the IBA certified rides were a 50CC (coast to coast in less than 50 hours) and a Saddle Sore Gold (1500 miles in less than 24 hours) for a plate of Texas BBQ and return to Tucson.

MsBubba isn't the best long distance driver and she is my princess so one of the annual rides was to drive her to the PNW with the motorcycle in tow. Once in Southern Oregon we would spend the night then I would drop her and the truck off, throw a leg over the bike and ride back to Tucson arriving in Tucson usually on the same day. A month of so later we would reverse the process. That trip in reality ended my riding. On the last trip back to Oregon to pick up MsBubba I was on I-5 North near Mt Shasta on a dark and rainy night and found myself unable to see and react well enough to go over 40 or so MPH. I knew at that moment my riding days were over. Back in Tucson I parked the Wing, it set for a year or so before I made up my mind to sell. To get the bike ready to sell I took it to the local Honda dealer. After a couple of weeks I called the Honda shop to see what the progress was, they turned me over to the manager and his first words were "Mr. Hatch your Wing almost burned my shop down". Of course my reply was "Are you telling me you burned my Wing up"? Bottom line the Dealer's insurance bought my Wing for more money than I could have sold it for but now there was no going back on the decision to quit riding.

Long way around to; Because of replacing my iMac the other day I was looking through my photo files and of course there were a large number of bike related photos. Over the next few weeks I expect to publish a few of 'em. Mostly because I can but also the blog is a good place to store a few so they do not get lost.

I'm crossing the Lake Roosevelt/Salt River bridge. The bike is a Kawasaki Vulcan 2000. Of all the bikes I owned it was my favorite. In fact after they burned the Wing up the dealer still had it and I damn near bought it back. 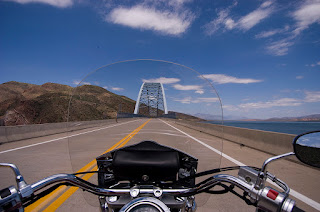 The last for the day is still on the Vulcan 2000 going up Mt.Lemmon just North of Tucson. 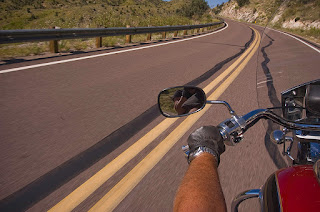 Sorry to bore you  but great memories