Ralph over at The Accentual Woodworker has inspired another post, seems he does that often. My guess is because he posts so much it is hard not to find something of interest in his blog.

Today he mentioned marking knifes. That made me think about the knifes I have vs. the knife I use. Below is a photo of some of 'em. 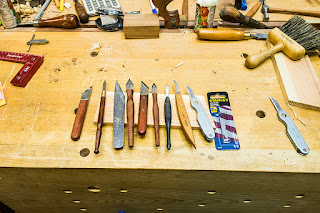 There are spear point, single point, single bevel, double bevel, Japanese, and Western knifes in the pile. Most at one time or another were my go to marking knife. Same old story, you need to kiss a lot of frogs to find the prince. Today the one I use is the cheapest of the bunch, a Stanley #10-049 with a 11-041 replacement blade.

I first noticed the Stanley knife in one of Paul Sellers videos and thought I'd give it a go. Mostly because of my marking knifes all were OK but also all had a "yes but" factor.  With the Stanley knife it was bonding at first mark, I've found no down sides to the knife. Blades can be sharpened and they hold an edge well but the blades are so cheap I will usually just replace (IIRC <$4.00 USD each). Blades are quick and easy to replace and the blade lock works easy and well. Some folks might balk at the double bevel, to each their own, but folks it is wood you are marking. Need I say more?

You can't see it in the photo but for this post I made marks with each of the knifes on the piece of Pine under the knifes. Along side each I also marked with the Stanley. In every case the Stanley mark was cleaner and I could see no difference in placement of the mark. The double bevel at least for me is a non-issue. Quality of the mark is and the Stanley was clearly better.

Another factor, the Stanley knife is so cheap I buy 'em by the bunch and have 'em all over the shop. I seldom need to hunt for a marking knife because if I look down there is usually one there.

As always with anything wood, YMMV.