I'm in the short rows on the boy child's table. It is ready for glue up in the AM. that and a little oil and the sucker will be out of the shop.

Getting the legs ready for glue up was a PITA because they are Sapele. I don't know if you have worked with Sapele, once finished it is beautiful but it is very difficult to work with hand tools, getting to ready for finishing isn't easy. The problem is it is soft and has stripes of reversing grain which of course leads to tearout even when using the sharpest cutters unless the cap iron is set to control the tearout. With an improper set up plane the tearout can be so deep and severe a scrapper is almost worthless. The best approach is two part, setting the cap iron correctly to control the tearout then follow with light scrapping if needed.  Many times just correct setting of the cap iron will be all that is needed. Here is a photo of one of the Sapele legs after using a #5 Jack to shape the leg. I think you can see how deep the tearout is if you click the image to enlarge it. 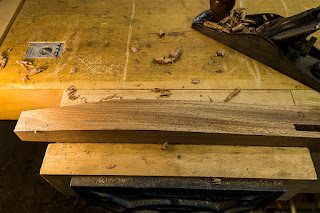 To control tearout with the cap iron it, the cap iron, needs to be set back just slightly greater than the desired thickness of the shavings. It is pretty damn close to the cutting edge, in other words when set correctly you should just be able to see a very thin reflection of light off the cutter.

Here is a photo of the leg after smoothing with a #4 with the cap iron set to control tearout. A scrapper is on the bench but I do not think it was used. Again click it to big it. 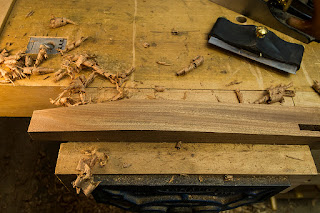 The aprons are SA Walnut which is also very soft but doesn't have the tearout problems of Sapele, it's just very light and easy to bruise and dent. I had the overhead fan on in the shop and I turned to go into the tool room, when I returned I thought I saw a Butterfly land on the floor, it turned out to be a SA Walnut shaving the fan had picked up from the bench and it flew for a bit.

It was a good day in the shop,