When we first started planing the Summer trip, our plan was to Camp Host for a month in five different Oregon State Parks. That changed once in the Cape Lookout State Park. The Park Ranger offered us four months Camp Hosting in the same camp site.  A beautiful place with cool WX even mid Summer, no diesel fuel to get to a new camp and no breaking and re-setting up camp for four months. Yes was a no brainer.

The view of Cape Lookout from one of the cabins: 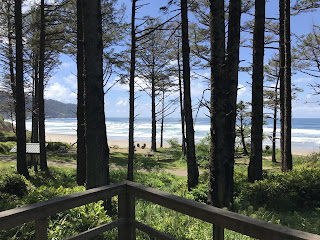 We are in what is known as "June Gloom", drizzling rain most days for at least a few hours but instead of the Tucson 100F+ temps we have temps in the mid 60's.
We have been offered a Camp Host position and accepted a return for four month starting June 2022.
This retirement thing ain't all bad :-).
ken