I've many posts praising the TFWW bow saw. Of all the turning saws on the market and that includes the Knew Concepts saws the !2" bow saw is the best of the lot. Full disclosure: While I do not have or have tried all the Knew Concepts saws I have a couple and while nice they do not hold a candle to the TFWW 12" bow saw. For a couple of reasons, the first is simply a 12" saw will cut faster than a 6" or even a 8" saw. The second is the TFWW saw blades. They are thinner than a coping saw blade and will fit the kerf of a Japanese pull saw as will a fret saw blade. The difference between the TFWW blade and the fret saw blade are two things, first fret saws are slower than xmas and fret saw blades break. In the years I've used the 12" bow saw I've never broken a blade.  Faster than either a coping saw or fret saw, turns as easily as either, the saw blades do not break, and cheaper than many of the Knew Concepts saws. What's not to like. 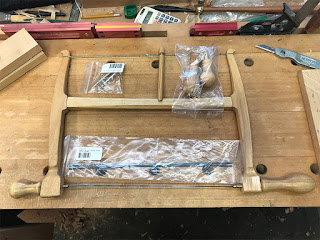