I normally just keep a couple of #5 planes in the tool cabinet behind the main workbench. A (I think) type 11 to 13 Stanley with a cutter sharpened as a Jack plane and a LN with Veritas O1 iron sharpened with less camber. The LN even with the thinner Veritas iron is still a heavy sucker. I also have a stack of #5 Japanese bi-metal replacement irons and a few Stanley #5 stuck in various cubbly holes in the shop, not many like I expect Bob has but a few. BTW I weighted the planes and all the Stanleys came in around 2100 g. while the LN is a hefty over 2500g. with the lighter Veritas iron. Four hundred grams doesn't sound like much but it feels like a lot. 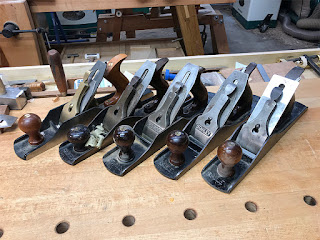 The line up. The Stanleys run from a Type 9 to type 11 and 13 with one Bedrock in the mix. I expect to work through the bunch picking the best to replace the LN in the tool cabinet. While some have OEM cutters, the OEM cutters will be replaced with Japanese irons.

The Japanese irons come with very flat backs, are easy to sharpen, being high carbon steel get very sharp and hold the edge very well. Here is a photo of the back of one of the Japanese replacement irons after just a few swipes on a 600 grit diamond stone. It is ready to go to the finishing stones. 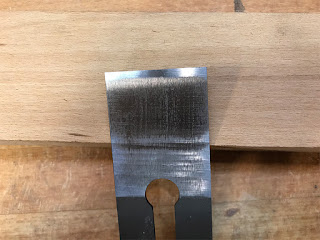 More as I work through the #5s.