Yesterday I posted about four of my #4 planes, two "posh" and two not so "posh". Of the four my least favorite was a Record #4 from sometime in the late 1970's to maybe as late as the 1980's. OF's memories sometimes are not too reliable. Anyway to cut to the chase, Sparks replied that Record kept its quality up much longer than Stanley from the same time period. Bottom line I thought I'd take another look at the Record and the Stanley. The Stanley #4 is smack dab in the middle of the best planes Stanley made. I haven't run a Type check on it in years but IIRC it is a Type 13. The Record is from well past the War and all hand tools lost quality in that period, some more than others. When I bought the Record it was because Record was considered to have retained better quality than the Stanley planes of the same time.

As I posted yesterday, the Record was my least favorite of the four planes, mostly because of the tote and just overall cheesiness. That judgement was probably unfair because I was comparing it to two modern boutique planes and a Stanley that was made when Stanley was at the top of its game. The Record is a capable plane, it and post War Stanley's are very similar with few differences.

I made a few photos this morning to show some of the difference between a pre-War Bailey type plane and a post-War Baily. 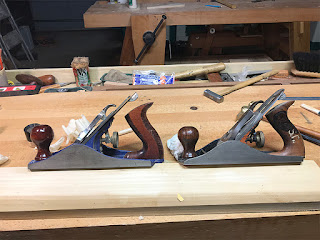 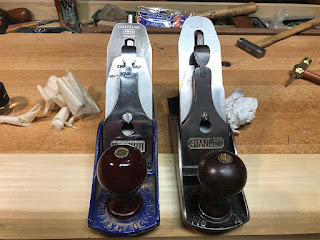 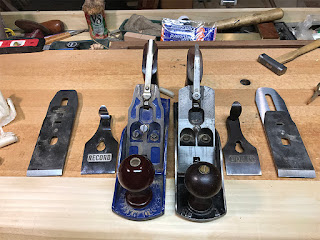 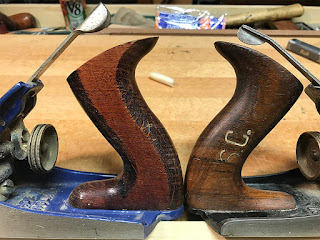 Small differences but they can make a big difference in feel when cutter meets wood.