Small Changes To The Bench and A Old Appliance

I've had little time in the shop after the return from Houston. MsBubba wanted a new electrical outlet in the kitchen and the modem died. Both were near full days to fix.

Have I ever told you how much I hate pulling wire. The good news, it was a one trip to the hardware store job. The bad, it still took almost a full day to complete.

Today was tech support hell, after hours of "live chat" they finally decided my modem was bad and sent me to the company store to pick up a new one. After installing the new modem at first it wouldn't let me rename the wireless networks which of course needed another couple of hours of 'live chat" to resolve.

Like I said shop time has been limited but I did get a couple of things done. First was cleaning up the mess I left getting out the door to Houston and unloading the tools and portable workbench from the truck.

I've wanted to add a lower shelf to the Moravian bench and my first thought was to buy some Home Depot Pine for the slats. Bad ideal Bubba, I couldn't believe the price of bad boards. After digging through the wood pile I found a 4/4 Red Oak board that was just long enough to do the job. The Red Oak looks better than the Pine would have anyway.

Here is a photo, I expect I will bevel the edges and maybe put a "stop" on the end boards along with maybe some Danish Oil finish. 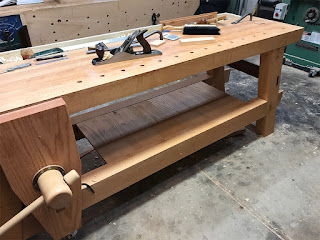 While digging around under the other bench I found a bench appliance I had started but never finished. It was all there but I had not glued the 3/4" dowel to the appliance. It is a simple but very useful bench helper.

A photo of the appliance in use. 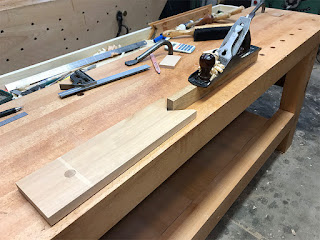 My guess is I made it as long as I did to use in the end dog holes so the vise would not be in the way. Whatever it is a great way to hold work for edge planning.