For the last few years Tucson's local WoodCraft has held a parking lot sale for folks with tools to sell and of course those that would like to buy used tools. This Fall's sale was yesterday 11/16/19 starting early morning.

A photo of my set up: 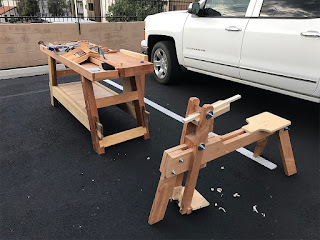 I had a couple of Veritas planes and a PM v11 chisel set that I do not use. Most of the other tools are chisels that have been rescued and are never used, a few marking gauges, some unused water stones and a brace along with more saws than I can count. The big items were a Moravian bench and a shave horse. I didn't really expect to sell either of them but someone might decide they need a bench after playing on this one. The bench itself is the best sales tool I know, it is such a pleasure to work on. Folks who have not played with a Moravian bench can't conceive of a bench this portable, light, and stable all at the same time. The laws of physics and the Schartz dontchknow.

I had a sharp draw knife there so folks could play on the shave horse (with very close supervision) and I think it was a big hit. I also had my personal sharpening set up there to entertain me when things were slow and touch up chisels sold if asked and a couple of folks did.  My personal stones are a Norton Med India, a Pike Lilly White Washita, and a Surgical Black Ark. I'll die clutching the Washita and the Surgical Ark in my cold dead hands. I think the 2nd. Amendment applies to sharpening stones, if it doesn't it should.

I didn’t sell any of the “big” stuff but moved a good number of chisels, stones, marking gauges, and saws. It was a beautiful day with temps in the low 80’s and I visited with a bunch of folks, some old friends.

BTW, I'm still blown away (60's lingo for amazed) how easy it is to take the Moravian bench apart and then set it back up.