At one point last night MsBubba, while I slept, whispered we have a new kid in town. I'm not sure of her name or even if it was a dream but I'll bet it's true.

Yesterday I ripped the Beech lumber into slats. Today starts the real work on the bench, getting the slab wood ready for glue up. other than the completed slab and base, these are the heaviest hunks of wood to be worked. It's almost a toss up between doing the prep by hand or machine. I'll start using the machines but may end up finishing mostly by hand. 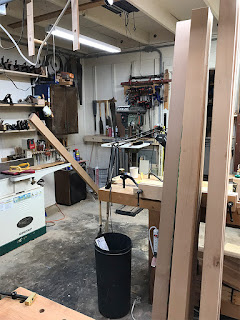 I'll glue up in two's so I'm only dealing with one glue surface at a time. It takes longer that way but I think is easier and less backbreaking until you start dealing with putting the glue ups together.

It should be heavy enough to stay put but at the same time break down into manageable parts for moving when needed. That is the major problem with the French/English main bench, without the neighborhood or a fork lift that sucker is immoveable.

I talked to the woodstore manager yesterday, I made a return trip because of a BF the day before and I was short one board of Beech, he said the order for my 12/4 Ash was made too late to be in yesterday's shipment. That was the reason it wasn't there but he would see if they could get a special delivery next week. We will see, I really don't want to drive to Phoenix and back.

Anyone want to learn how to make a Moravian bench? Have I got a deal for you :-).