Sometimes the BBQ gods smile from on high.

I've cooked a lot of BBQ and I can't remember any ever being bad or even less than good. I also can't remember a brisket ever being this good. It is unbelievably tender. The BBQ gods truly did smile on the pit today. What started out as just a sample to check it out has become at least a pound gone.

Here it is with some of the first cuts: 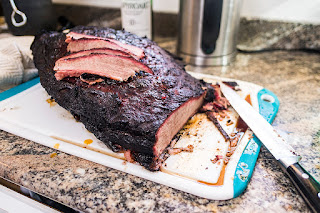 A short BBQ primer: If aluminum foil touches the meat at anytime in the process it ain't BBQ. It is likely smokey steamed roast but it ain't BBQ. If it is covered with a sweet sauce it ain't BBQ. I'm not sure what it is other than an abomination but it sure isn't BBQ. Of course I'm missing the most important part of Texas BBQ...A roll of butcher paper and a Big Red.

Good eats for the next few days.