I've never been a leg vise fanboy. After using one for a couple of years I thought they were a fad, fussy, and fiddly with holding power no better if not worst than a Metal QR vise. Those opinions came from having a metal screw leg vise on my main workbench off and on for almost two years and using leg vises with metal screws in other shops. After a couple of years going back and forth between the leg vise and my old English QR vise when I build the new bench it was the English vise all the way.

For the last bench build because it was designed to break down and be portable I decided to use a wood screw leg vise. I'm not sure what the weight difference is but it is considerable and the leg vise is easy to break down into parts. It was a no brainer.

I ordered the screw from Lake Erie Toolworks. The premium kit is $250 USD.  Here it is installed on the Moravian Bench: 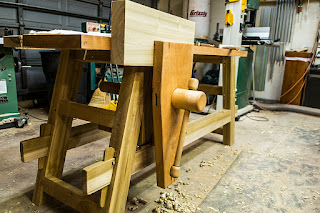 This wood screw has totally changed my opinion of leg vises. The fad part still holds but the fussy, fiddly and lack of holding power are no longer operative. Two things, it is fast, to go from holding a 4/4 board to one that is 12/4 is as fast as the QR if not faster and holding is unbelievable. I whacked the hell out of the board in the vise with a mallet and it did not budge a mm. Not that I would do it but I believe I could chop a deep mortise in the vise, it holds that well.

The only problem now is I've been eyeing the main bench with the thought of retro-fitting a wood screw leg vise. There ain't no way that I can see to do it with less work than building a whole new bench and this bench is close to perfect as it sets.  But damn it would be nice if it had as good a vise as my portable bench.