I've spent the last couple of days building a shave horse. I've wanted one for years and had almost decided on just whipping out the AmEx and doing it the quick and easy way.

But I had a couple of kinda free days and two DF 12' 2X12's left over from painting the house. I figured even with all the mistakes I'd make following plans, have I ever told you how much I hate following someone else's plans, there would be enough DF to make a shave horse.

I wasn't too far off, there is a lot of scrap and firewood but not much of the DF left. Anyway lots of screwups, do overs, and I don't give a damns it is good enough, in the build. Have I ever mentioned how much I dislike working to plans? I thought so.

Whatever, it works like a champ but I expect I'll use it for awhile to see what mods it needs and then build another out of nicer wood. 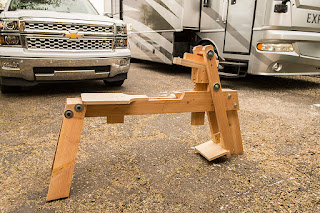