Today I'll split the day between the kitchen and the shop. The shop work is still light duty under MsBubba's supervision. The kitchen will be south of the border.

The one thing store bought is a gal of Pozole from a local cafe. They only make it along with Menudo on Sunday and most of the sales are takeout. If you bring your own container it is a buck cheaper so you end up in a line to order and half the line is holding some kind of pot.

Both Menudo and Pozole are hominy based soups with a pork or beef stock. The biggest difference between the two is Menudo's meat is Tripe and Pozole's is what most Americans think of as meat. Menudo is a traditional Sunday soup because it is claimed to cure a hangover.

Pozole is usually served with a slice of line and shredded cabbage or other green. 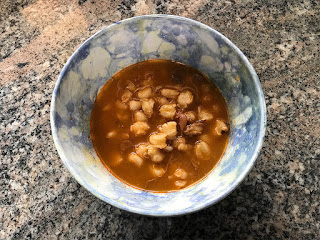 My part today is making a pot of Mexican stew, Carne con Chili Colorado. If you google it you will come up with all kinds of foul recipes for Chili, AKA Texas Red. While the stew and Chili use pretty much the same ingredients the end results and use are different. Chile is a stand alone meal, beer and soda crackers optional. Carne con Chili Colorado is severed with rice and beans, the beans can be either fresh beans or re-fried, I like 'em both ways. Beer optional but suggested.