As I have posted before I want a traveling tool box to carry in the motorhome while I'm driving Ms Daisy around the country. I built a classic western tool chest a year or so ago but it turned out to be too big....even if it would fit in the motorhome bins it would take at least two twenty somethings with strong backs to get it in and out. I tried to talk MsBubba into finding a couple of boytoys but she said no way. Oh well back to the drawing board.

The woodstore had some kind of Pine, not cheap, close to $5 USD a board foot but was in 12" width by 8' or so. I made Levi's toy box out of it and it worked pretty good because I used dovetails for the joinery and the boards I used were OK, a little wind and some cupping but not bad enough to keep the dovetails from pulling everything together. Which was good because the boards were too thin to take much off truing them up.

Cut to the Japanese tool box. The board that was left developed a bit of wind setting in the shop. So much there was no way to true it and have any board left. I decided to press on hoping I could pull the wind out while joining the box. I did but....it is a big but...the cut nails busted out on the last joint. I put a couple of screws at each corner, which is what I should have done in the first place or even better have chunked the board and used another straighter one for the build.

Here is a photo of the busted out nails. I will finish the box and use it in the shop, with the screws in the corners it is strong, just ugly, and will make good shop storage. The next Japanese tool box will be made of Poplar so I will have some wood to work with. It will be a little heaver and I'm not sure if I will use cut nails and butt joints or M/T joints. I'm leaning towards M/T, the cut nails I'm not sure of. 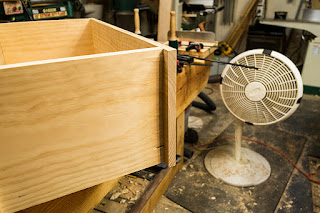 Over on SMC there was a question on setting the iron in wood stock planes. Derek Cohen answered that one way he does it is to use a float glass setting jig. He was getting the usual forum scrum when someone posts something different. Problem with the scrum was I often use the same technique and it works very easily and quickly. While I do not use the glass jig for all setting it is very handy for initial settings after removal and replacement of the iron. Because of the pile on I dug out several of my woodies and the jig. After removing the irons and reseting them using the jig I made a photo of the planes and shavings after setting the iron with no other adjustment. Works well, doesn't coat much and can sure cut down on the setting learning curve. 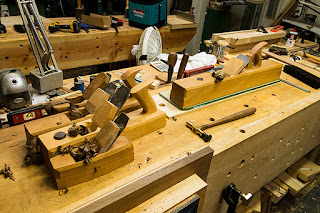 PS: I'm getting so forgetful someone just needs to shoot me. I send a box out yesterday with several goodies, one of which should have been a extra #3 Stanley. Bridger was over today and I had a #4 Stanley out to follow him home. When we went to the shop setting next to Bridger's #4 was the #3 base that should have been in the box along with the iron, chip breaker, and lever cap that are in the box.