I know the colon doesn't belong in the time stamp but it does make it easier to recognize as time notation.

At 1201 EST/1001 MST MsBubba and I toasted the new President with champagne, followed by burning of Sage to ward off the evil spirits left behind by Trump. An hour or so later we had a champagne and Eggs Benedict lunch. I can't remember a better vacation day.

The long national nightmare has ended and it is time for the RWNJ/racist assholes to crawl back under the rocks where Trump found them. I know it will take time, it took 50 years of Nixon's Southern strategy to produce its logical outcome of Trump. I hope it doesn't take another 50 years to recover.

Back to the shop:

I've come close to selling the Tormek so many times but have always backed off when it came time for the nut cutting. I'm glad I did. Lately I've been playing with it and the "unicorn" profile and the results are very good. The funny part is if you follow the Tormek instructions for sharpening cutters you have a "unicorn" profiled cutter. Being male, "I don't need no stinking instructions", it didn't dawn on me that was the case until several weeks ago while bored I watched a Tormek video.

Two OF's In The Shop

Having a whisky with a friend in the shop. Nothing like two Old Farts trying to remember what day it is while enjoying a whisky. 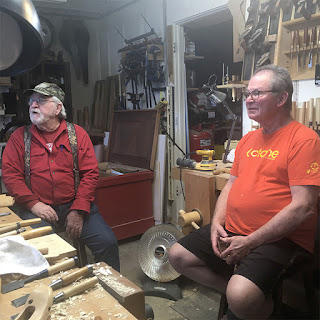 A photo of the "sharpening wall". It is a work in progress but when finished will have all the sharpening tools in one place including the saw vise. 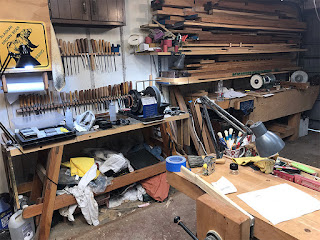 I've started using the Tormek on the kitchen knifes and shavespoke cutters, it really works a treat on both. I've gone back and forth between stone wheels, CBN, and Diamond wheels. While slower, the original stone wheel is the best all around option. As posted earlier, the leather buffing wheel with compound seems to give a "better" Unicorn edge than the soft cotton wheel on the grinder. I'm still playing with it but really like the results so far.

Everyone Needs a Shop Critter

Sweet Maggie Dog is a good shop dog. The machines do not bother her, the only downside is she is usually asleep in the one spot you need to stand and maybe MsBubba blaming me for the wood chips in the house 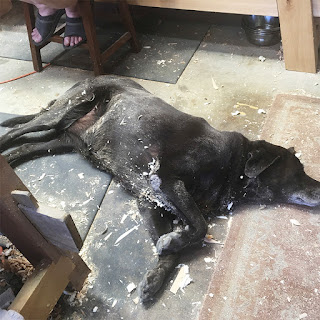 I've been playing with the Tormek buffing wheel to see if it will give a "Unicorn" effect. The first uses have been promising, much more so than the soft cotton wheel on the grinder. This has caused some moving of sharpening "stuff". I now have a sharpening "wall" not just a sharpening bench.

Ran the table, whatever you want to call it. Maybe we can start the return to being who we claim to be and the vermin will craw back under their rocks. I know it will not happen overnight but let us at least start the process. It is not OK for fat fucks wearing a red cap and a "Fuck Your Feelings" t-shirt to ride handicapped scooters down the aisles of Costco. Just one of the things I hope to never see again.

First Use of The Shavehorse

I made a simple spoon this morning using the horse and the bench. MsBubba likes mostly flat one like this which is OK with me they are much easier to make. 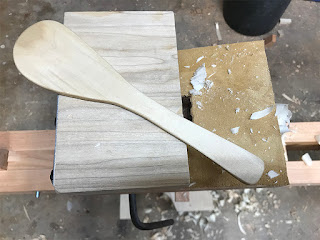 I burned a big hunk of Walnut a couple of days ago with out thinking that it would have made a dozen or so spoon blanks. Of course when I pointed out we were burning over $30 USDs of Walnut MsBubba had a cow. I just had flat head syndrome.

Other than maybe a little Tung oil the shavehorse is finished and works a treat. I may need to remake the swing arm after some use, it works fine but I do not trust the Honey Locust to not split out and I had rather make a new one in the shop vs. on the road. 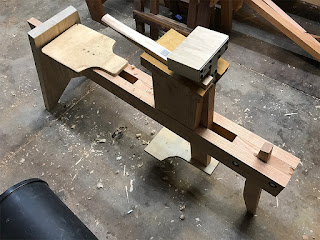 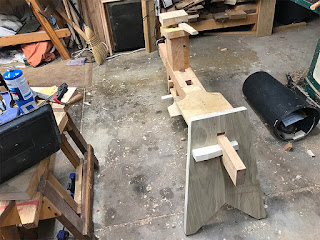 Ralph asked for photos of the metal rod (pivot pin). At the time it was straight and long because I had not sized it or shaped it.  A close up of the pivot pin: 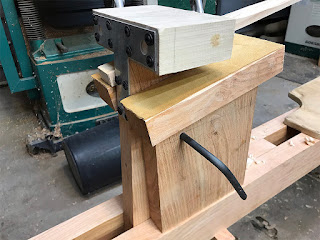 If you do chairs, spindles, spoons, or just like to turn bigger hunks of wood into smaller hunks a shavehouse is a good tool to have. If I had been working with a better wood instead of trying to rid the wood pile of future firewood it would have been an easy, quick build and most important it will break down and store in a corner with the portable Moravian workbench.
One last thought, I've used twin swing arms and now this dumb head, first impression is the dumb head is a better system.
Posted by I'm a OK guy at 5:40 PM 4 comments:

All the parts are made and more or less fitted, still lots of clean up to go but I had to give it a go as is. While the dumbhead is not attached and pegged to the swing arm it holds tenaciously. Once cleaned up this sucker will be a very good shavehorse. 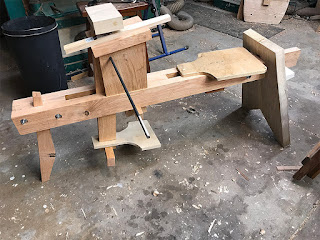 Work on the shavehorse stopped over xmas week because it is also MsBubba's B-Day week. Today was my first chance for shop time and as expected the Honey Locust bit my butt like I knew it would before finishing the shavehorse. While chopping the mortise for the rear leg wedge a big chunk blew out, the wedged mortise will hold the leg OK but it sure is ugly.

Left to do: fit the treadle to the swing arm, glue and peg the dumb head, cut and shape the swing arm pivot, and clean up and oil the whole thing.

A couple of photos: 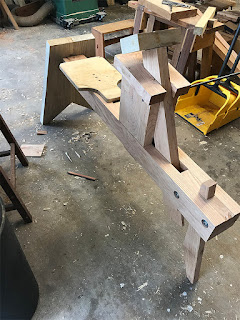 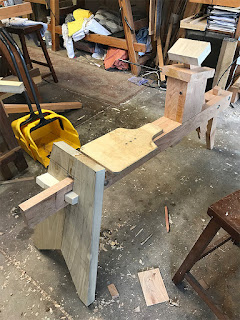 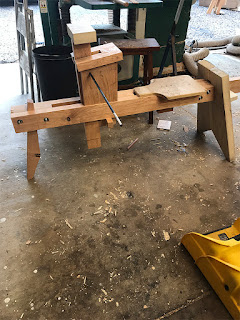